Iconic Indian batsman Sachin Tendulkar rose a couple of rungs to be joint fourth but fellow veteran Rahul Dravid dropped out of the top 10 in the latest ICC Test rankings issued on Friday. 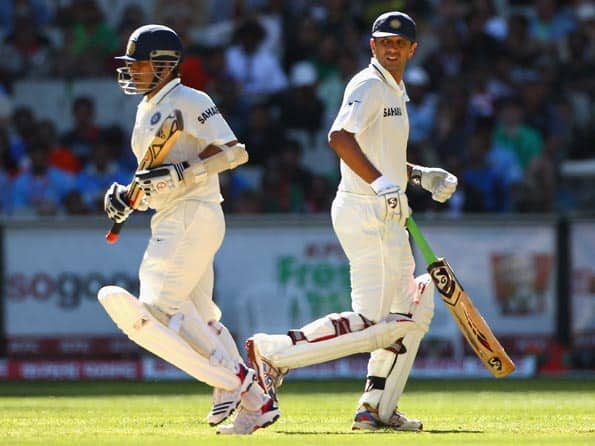 Iconic Indian batsman Sachin Tendulkar rose a couple of rungs to be joint fourth but fellow veteran Rahul Dravid dropped out of the top 10 in the latest ICC Test rankings issued on Friday.

Tendulkar, who scored a half century in the opening MCG Test defeat against Australia, shared the fourth spot with South African all-rounder Jacques Kallis, while Dravid slipped to 11th after dropping a couple of spots in the latest list, the ICC said in a release here.

Among the bowlers, pace spearhead Zaheer Khan was the only Indian in the top-10 at an unchanged sixth position.

Among the Australians, fast bowler Peter Siddle, who took three for 63 and three for 42 in Australia’s 122-run victory, jumped five places to seventh, where he is joined by Sri Lankan Rangana Herath.

Herath claimed match figures of nine for 128 which turned out to be the cornerstone of Sri Lanka’s 208-run victory over South Africa yesterday.

Australia fast bowlers Ben Hilfenhaus and James Pattinson have also moved in the right direction. Hilfenhaus, who took five for 75 and two for 39, has gained seven spots in the rankings and now sits just outside the top 20 in 22nd position.

Man of the match Pattinson has been rewarded for match figures of six for 108 with a jump of five places which puts him in 31st spot.

There is something to cheer for young India fast bowler Umesh Yadav and South Africa’s debutant Marchant de Lange.

Yadav has moved up five places to 42nd spot after figures of three for 106 and four for 70 while de Lange has entered the list in the 51st position after figures of seven for 81 and one for 45.

Australia opener Ed Cowan has entered the list at the 61st position after making an impressive debut in Melbourne.

The batting list is headed by Kumar Sangakkara who became the eighth Sri Lanka batsman to score a zero and century in the same Test. (PTI)

SCG my favourite ground away from India: Sachin Tendulkar