Batting great Sachin Tendulkar turned 39 on Tuesday with an impassioned plea from his childhood coach to carry on playing cricket for India since he is "far from finished". 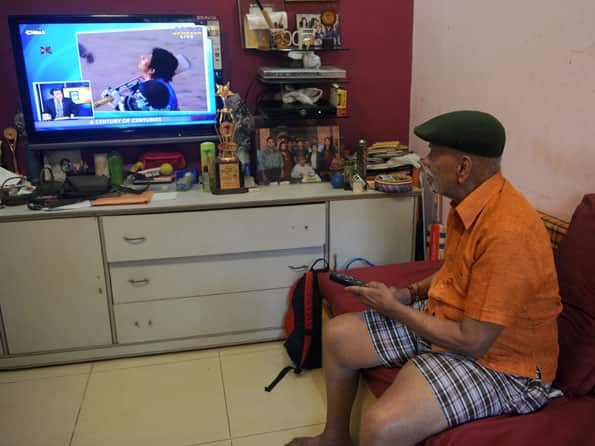 Batting great Sachin Tendulkar turned 39 on Tuesday with an impassioned plea from his childhood coach to carry on playing cricket for India since he is “far from finished”.

“All those murmurs about his retirement must stop, this is not the right time to go,” said Ramakant Achrekar, 80, the man credited with the early training of the leading scorer in Test history.

“He must not retire now. He must go on playing and scoring runs for the country,” the celebrated coach told the Hindustan Times.

Tendulkar made his international debut in 1989 and has played more Tests (188) and one-day internationals (463) than any player.

He is the highest run-getter in both forms of the game and last month became the first batsman to complete 100 international centuries — 51 in Tests and 49 in one-dayers.

But Tendulkar took more than a year to move from 99 to 100 hundreds — against Bangladesh during the Asia Cup in Dhaka — and many fans started to believe he needed to rethink his career, especially in one-dayers.

The Mumbai batsman has himself dismissed talk of retirement, saying it would be “selfish” for him to quit when he still had a lot to offer Indian cricket.

Achrekar predicted Tendulkar, currently playing in the Indian Premier League, would return to his best now that the 100th century was out of the way.

“I can see that his form is picking up and it is only a matter of time before we see him score those magnificent runs again,” he said. “Now that he has got his 100th century, he will play freely.

“My Sachin is going to play better than ever. He is far from finished… those who even bring up talk of his retirement are wrong.”

Achrekar said Tendulkar would help India bounce back from two humiliating 4-0 Test series whitewashes by England and Australia in the past year.

“The India team has been going through a rough patch lately and I believe it is Sachin who will help them sail out of it,” the coach said. “He will score those crucial centuries to help the team do well once again.”

Achrekar, whose other wards included former India internationals Vinod Kambli, Praveen Amre and Ajit Agarkar, said it would be hard to find another cricketer like Tendulkar.

“Sachin is the best batsman the world has seen,” he said. “We may find another great, but I do not think we will ever get a player of his calibre.

“The day he retires, the loss will be irreplaceable. Not only will the country feel it, but the world of cricket will miss him.” (AFP)