Fraser is an owner of a multifaceted personality. Besides being a former cricketer, he is Middlesex County Cricket Club's managing director of cricket, selector of English national team, a commentator and an acclaimed journalist.

Angus Fraser, a respected figure in English cricket circles, has joined the bandwagon of players who have named their All-Time XIs in recent times. The former England cricketer recently picked his XI for the Lord s Cricket Ground s official YouTube channel. He has named as many as five West Indians in his XI, which suggests how highly he rated West Indies as opponents during his playing days. The remaining composition is two players from Australia and one each from India, New Zealand, South Africa and his home country England.

Fraser picked Graham Gooch, the only Englishman in the XI, as the opener as well as the captain of his team. He spoke about the influence Gooch had on him as a player when he started up in international cricket and gave it as a reason behind picking him. He then named West Indian batting great Gordon Greenidge as Gooch s opening partner.

The real predicament for Fraser started when he came to the middle-order. But picking Viv Richards at No. 3 was not a difficult task for him. Brian Lara, the greatest player Fraser had the privilege of playing against, found a place at No. 4. He was followed at No. 5 by arguably the best batsman to grace the game Sachin Tendulkar.

Jacques Kallis, the greatest all-rounder of the game according to Fraser, took the No. 6 spot followed by wicket-keeper batsman Ian Healy at No. 7.

When it came to bowling, Fraser picked up spin legend Shane Warne as the obvious choice for the lone spinner s spot. The fact that Healy kept wickets to Warne for a long time during his career was also kept in mind while picking the two. In pace department, he picked up Richard Hadlee, somebody whom he admired and emulated a lot. Next up, he was in a dilemma, as there was a toss-up between Glenn McGrath and Curtly Ambrose. He eventually picked up the latter and rued leaving McGrath out. The final spot went to Malcolm Marshall, who, according to him, was the greatest fast bowler of all time.

Fraser is an owner of a multifaceted personality. Besides being a former cricketer, he is Middlesex County Cricket Club’s managing director of cricket, selector of English national team, a commentator and an acclaimed journalist. He played 46 Tests and 42 ODIs for England, taking 177 and 47 wickets respectively. 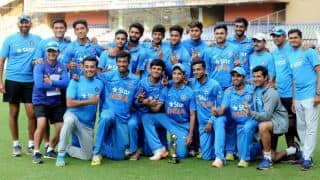