Sachin Tendulkar played his last match for India on November 16, two years ago. It was the second Test of the two-match series against West Indies which was played in his home ground, Wankhede, Mumbai. The one-sided game that had begun on November 14 eventually ended inside three days with the hosts sealing the series 2-0 with a superb victory by an innings and 126 runs, thereby making Sachin’s farewell match a very memorable event. The crowd had an opportunity to watch the Master Blaster only once where the latter did not disappoint them. He was on crease for around 150 minutes having scored 74 from the 118 balls that he had faced. READ: Sachin Tendulkar cried, and the nation cried with him

It was West Indian spinner Narsingh Deonarine who got his name etched in the history books when he dismissed the legend in his very last international innings. A flat delivery outside off from Deonarine, Sachin tried to cut it but just managed a thick edge which flew into the hands of Darren Sammy in the first slip. It was all over at Wankhede, Tendulkar was dismissed for the very last time, and an awkward silence spread in the stadium before it broke into applauds when Sachin left the field. He received a mobile guard of honour from the Indian team on his way back to the pavilion.

The iconic batsman bowed out of his incredible career with 15921 runs from 200 Tests with 248 not out being his highest score in the whites. He was also handy with the ball whenever the skipper wanted him into the action. He had 46 Test wickets to his name. READ: Indian cricket is secure; but can Sachin Tendulkar ever be replaced?

He began his farewell speech by telling, “All my friends. Settle down let me talk, I will get more and more emotional. My life, between 22 yards for 24 years, it is hard to believe that that wonderful journey has come to an end, but I would like to take this opportunity to thank people who have played an important role in my life. Also, for the first time in my life I am carrying this list, to remember all the names in case I forget someone. I hope you understand. It’s getting a little bit difficult to talk but I will manage.” 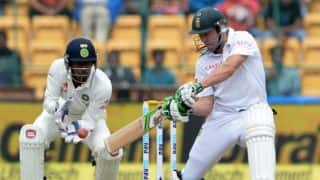 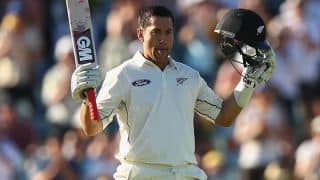