John Wright as the Indian coach feels he worked with an outstanding group of young men and was very fortunate in that regard.

Former India coach John Wright is happy with the fact that the likes of Rahul Dravid, Anil Kumble, Sachin Tendulkar, Rahul Dravid and VVS Laxman are running the current Indian set up. Wright believes that these are the best people to better cricket in India. While Dravid is the coach of India A and the India Under-19 team, Kumble recently took charge as the head coach of the Indin senior team. Kumbe’s first assignment was to oversee India tour of West Indies. India won the four-match Test series in the Caribbean 2-0, but went down fighting in the T20I series in the USA. READ: India coach Anil Kumble to follow John Wright, Gary Kirsten’s low-profile approach

“I’m delighted to see the involvement of some of the people I had the pleasure of working with. Anil as coach, then Rahul getting involved with the A team and Under-19 team, Laxman and Tendulkar and Sourav involved in an advisory capacity and in IPL teams. [Javagal] Srinath is a match referee too, and these really are the best guys available to better cricket in India,” said Wright, according to timesofindia.indiatimes.com.

“I just worked with an outstanding group of young men and was very fortunate in that regard. From that point of view, to see them getting back into the game in these roles, and giving the knowledge that I know they have as well as the good qualities that made them what they are as players and made them members of the great team that went on and did some good things, is so valuable for Indian cricket,” Wright, who was the coach of India between 2000-2005 said.

Wright had a successful stint as the Indian coach. India won a memorable Test series against Australia at home, drew the series Down Under. They also won the ODI and Test series in Pakistan and made it to the 2003 World Cup final in 2003. Wright has been part of the Indian Premier League (IPL) in the capacity of the head coach of Mumbai Indians (MI). He feels that the IPL is fantastic and it is a tournament that he enjoys. READ: Anil Kumble: If you want to be the No.1 team, you shouldn’t worry about pitches

“Twenty20 is the big change in cricket, and the biggest thing is that it’s so exciting and vibrant. The IPL is fantastic and I enjoy it passionately … being able to scout talent and meet young cricketers across India, in particular,” said Wright.

“What’s also exciting is that there are quality players coming through who are successful in all formats, foremost being Virat Kohli. Just brilliant. There are some specialists around, mostly in T20 and ODIs, which has been the case for long if you look at one-dayers. But the guys who really make a difference in T20s are also the guys who making hundreds and taking five wickets in Test matches, because they can adapt their skills to different formats,” he added.

New Zealand, who are in India to play three Tests and five ODIs will be led for the first time in India by Kane Williamson. Williamson is someone, who Wright has been observing right from when he was in high school and had figured that Williamson is a special player. He also hopes that the extrs pressure of being captain does not prevent him from enjoying the game. READ: Virat Kohli, Ravichandran Ashwin, KL Rahul lauded by Anil Kumble ahead of New Zealand Test series

“Williamson is a beautiful player, who I first saw when he was in high school. It was pretty obvious to all of that he was a special kid. He’s technically outstanding and has a good attitude, he’s a smart player,” said Wright. “When I was coach, I picked him to go the World Cup [in 2011] and we got to the semi-finals. I batted him at No 7 and people were a little dubious, but he ended up scoring more runs to balls faced [99 runs, strike-rate 107.60, average 49.50 in four games]. His development since then has been tremendous to watch and admire.”

“You just hope that with the added responsibility of captaincy, he keeps on playing the way he’s been doing and enjoying his cricket,” said Wright. “The big thing is – when you’re creating any team, you don’t want to put too much pressure on anyone. There are six batsmen who’ve all got different styles etc etc and he’s just one of six or seven. If you’re going to do well in India, you have to get in and then go on. Kane has the advantage of having scored his first Test hundred in India on debut and he’s a beautiful player of spin bowling. I’m sure he’ll have a great tour and people will love watching him bat because people understand cricket in India and love watching good players.”

Wright was the New Zealand captain when they last won a Test in India and he was hopeful that the current set of players bring similar success to the team. READ: Anil Kumble, BCCI congratulate India A on their Quadrangular A Series victory

“There’s depth in that lineup. You’ve got Ross Taylor, a proven player; young Tom Latham who got runs in the UAE; and some young spinners coming through. That’s exciting,” he said. “It’s a great opportunity for New Zealand; they’re a young, talented side on the way up and they’ve got opportunities to win Test matches. Let’s hope they have a good tour and provide a good contest. Its two reasonably young sides against each other and it should be fascinating,” said the former New Zealand skipper. 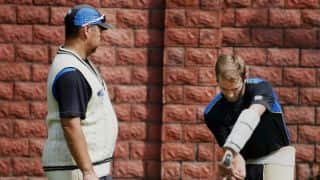 Virender Sehwag renames Paralympics after Devendra Jhajharia’s Gold; other cricketers send in their wishes too