Sachin Tendulkar returns from IPL to vote in general elections

Sachin Tendulkar returns from IPL to vote in general elections

Tendulkar urges Mumbaikars to go out and vote.

Sachin Tendulkar has taken a brief break from the Mumbai Indians campaign in the Indian Premier League 2014 to cast his vote in the Lok Sabha Election 2014. The voting day in majority of places in Mumbai coincides with Tendulkar’s birthday and the maestro is set to celebrate his 41st birthday in his hometown. Tendulkar also urged the Mumbaikars to go out and vote.

“Every run counts in the game of cricket and every vote counts in an election. Don’t underestimate the power of your vote. In Mumbai to exercise my right. Hope you play your part — Please Cast your vote,” Tendulkar posted on his Facebook page.

Tendulkar retired from international cricket after his 200th Test for India on November 16, 2014. The Little Master is currently with te Mumbai franchisee as an icon. He retired from IPL after Mumbai’s IPL win in 2013. 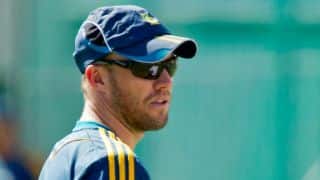