Over the years, the little master, Sachin Tendulkar has been a nightmare for most bowlers in the world of cricket. However, not many have made him lose his sleep. Former West Bengal and Indian quickie Prashant Vaidya, is one of those few who forced the champion batsman to be awake in the 1990s. 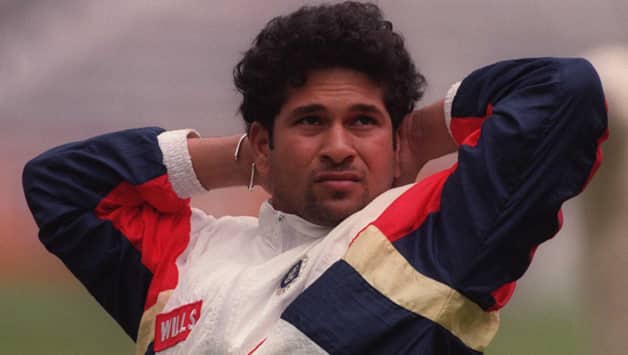 Prashant Vaidya and Sachin Tendulkar (above) shared a room during the ODI tri-nation series in Singapore,1996 © Getty Images

Over the years, the little master, Sachin Tendulkar has been a nightmare for most bowlers in the world of cricket. However, not many have made him lose his sleep. Former West Bengal and Indian quickie Prashant Vaidya, is one of those few who forced the champion batsman to be awake in the 1990s.

In 1996, India was playing in a tri-nation One-Day International (ODI) series in Singapore. The former Indian pacer, Vaidya was included in the touring party too.

“It was for the first time that the Board of Control for Cricket in India (BCCI) had given the players separate rooms. Sachin, probably was feeling a bit uncomfortable sleeping alone and he asked me to join him. Next day, we were playing Pakistan and as I wasn’t in the playing XI I stayed with him. Next morning I asked him whether he had slept well and he answered in negative. I asked him ‘Kay Jhala’ (What happened).

“He said that I was snoring non-stop. It left me terrified and embarrassed as we were playing our arch-rivals Pakistan and I had deprived India’s star batsman of a good night’s sleep. To my luck, Sachin scored a hundred in the game and I was the most relieved man,” Vaidya was quoted as saying by Times of India.

The pacer, who owed Tendulkar a dinner, shared another intriguing story.

“I along with Sanjay Manjrekar and Sachin went out for dinner. We saw Aquib Javed, Wasim Akram, Waqar Younis and other Pakistani players. When we passed them, Sachin greeted them. Aquib grabbed his hand, looked in his eyes and said ‘you make us toil all day on the field… at least now you can afford to smile. Sachin smiled at them from ear-to-ear. Such was the fear and respect he commanded that is brought relief to the bowlers,” Vaidya stated.

Vaidya wittily says that he had a ‘peace-pact’ with Tendulkar whenever they again squared up against each other on a cricket pitch.

“We had this ‘peace-pact’ in place whenever I bowled at him in domestic cricket. Once in a Challenger Trophy game he was clobbering all the other bowlers but I somehow managed to fare better than others. Perhaps I was bowling well to him or he took me too seriously.

“When I stood at the top of my run-up, I jokingly waved a peace sign towards him. That brought a smile on his face and we got on with the game. Jokes apart, bowling to him was always a challenge. I played against him twice and picked his wicket on both occasions,” Vaidya recalls.

Vaidya also reminisces how the great batsman soothed his tangle of nerves during his international debut.

“He was fielding in the slips. As I was marking my run-up, he spoke to captain [Mohammed] Azharuddin and came down at mid-off, just to calm me down. He eased my pressure. That’s his greatness. He is always there for newcomers.

“I saw many first of Sachin and his first one-day hundred was one of them. I still remember the shot that brought up his hundred with. Who would have imagined he would score close to 50 ODI hundreds,” he opined.