Indian batting legend Sachin Tendulkar dedicated his Bharat Ratna to his mother, while brother Ajit Tendulkar said the 40-year-old would be happy to receive it. 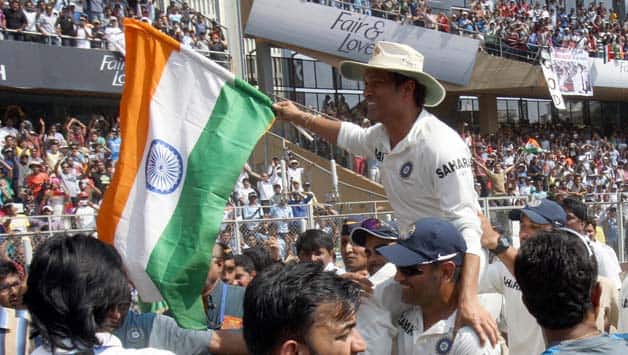 Indian batting legend Sachin Tendulkar dedicated his Bharat Ratna to his mother, while brother Ajit Tendulkar said the 40-year-old would be happy to receive it.

Tendulkar, who on Saturday retired from international cricket, is to be honoured with Bharat Ratna along with Professor CNR Rao.

The 40-year-old will be the youngest person to receive the highest civilian award in the country. He will be teh seventh Maharashtrian to receive Bharat Ratna after Dr. Dhondo Keshav Karve, Dr. Pandurang Vaman Kane, Vinoba Bhave, Dr. BR Ambedkar, Lata Mangeshkar and Pandit Bhimsen Joshi.

Tendulkar told CNN-IBN, “I am thankful for this honour. I dedicate it to my mother. India is my motherland.”

Meanwhile, Sachin’s brother Ajit told ABP News, “I have no news about the award but if it is true then it is a big news. It is a very happy news for him. If a cricketer receives such an honour, that cricketer will be very happy.”

He futhermore added, “He has received a lot of awards, Arjuna Awards, Khel Ratna, etc. You don’t play for awards but while playing if you receive such awards, then you feel that everyone is praising you, and if you receive from the government then it is really a big honour.”

Rajeev Shukla, Indian politician and Board of Control for Cricket in India (BCCI) vice-president told ANI, “Sachin deserves the Bharat Ratna, I would thank prime minister and government for this. His records speak for themselves.”

Sachin Tendulkar is one of the greatest icons in India