The cars recently launched by BMW are a limited special edition.

In what has been a long and old association with the Indian cricket legend, Sachin Tendulkar, Germany luxurious car brand, BMW, who is associated with him since 2012, has launched special edition cars by his name. Sachin Tendulkar’s motivational words helped me: Footballer Sandesh Jhingan

Sachin has been a great follower and an avid fan of BMW, as he also owns a luxurious 7-Series sedan, which is one of the most exclusive cars in the whole world, reports motorbeam.com. Sachin Tendulkar-Shane Warne event not to compete with MCL: Dean Jones

The cars recently launched by BMW are a limited special edition, thatr has been named Sachin Tendulkar Edition, with 3-Series and 5-Series luxurious sedans. These editions have been exclusively signed by the legend himself and are just limited to 15 units. Sachin Tendulkar, Rohit Sharma, Ajinkya Rahane plant sapling on World Environment Day

Although BMW has not had a comfortable market in India so far, with rival brands like Audi and Mercedes giving heavy competition and have been in a heated tussle for being the number one brand in luxurious car market in the country. BMW has been held at par by these brands, who seem to develop and update their models faster, that in turn helps them attracting more customers with that of BMW. Amul launches celebratory advertisement on India’s advisory panel

However, BMW hopes that these publicity drive in the form of Sachin Tendulkar Special Edition sedan would help in boosting their sale and also aim to strike back with a bang in the near future in the market. Sachin Tendulkar: Now it is about giving quality time to my family 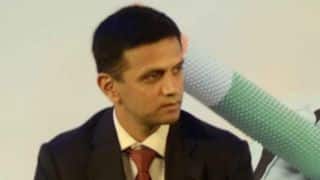 Rahul Dravid: Aim is to build the best team for ICC Under-19 World Cup 2016