Sourav Ganguly had earlier threatened to fly back if he does not open the innings in the All Stars T20 competition.

India legend Sachin Tendulkar takes a dig at his former opening partner Sourav Ganguly on social media. Ganguly had earlier jokingly said that he will fly back home if he does not open the batting in the All stars T20 cricket match, scheduled to be played at Citi field in New York on November 2. “I have told Sachin, if I don’t open, I will catch the next flight to Kolkata. So that is a criteria for playing,” Ganguly, who was in a jovial mood, told a news channel after practice. All stars T20 matches also have the likes of Shane Warne, Virender Sehwag and VVS Laxman. READ: Sourav Ganguly jokes he will fly back home if denied opening spot in Cricket All Stars League

28 players have been signed up to play 15 matches in three years, three of which will be played this year, beginnings on November 7. The idea of this initiative is to promote cricket in some of the non-cricket playing nations such as the United States itself.

Dada your application for the opener’s position is being processed!Hope the off drive is coming from the sweet spot @T20AllStars @ShaneWarne

It is understood that Laxman was having some trouble acquiring visa for the US. “V.V.S. Laxman has not got the visa yet, so he is a little worried. The US consulate are not giving him (laughs), but he will be there,” said Ganguly “Asked him about his [Laxman’s] batting but he said he can’t quite understand as to when the ball is being released. This problem will be there. I hope we will come into the groove once we reach the US.” READ: Sachin Tendulkar says Cricket All Stars League is meant to inspire people to play cricket

It is understood that many of the local cricketers, boys and girls were training with the legends of the game. Tendulkar and Warne also went to Facebook headquarters in New York to promote this event. 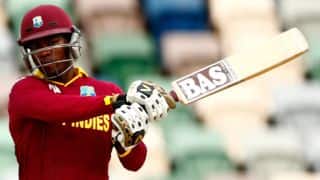