Sachin Tendulkar to be honoured by CSA for 200th Test

Sachin Tendulkar to be honoured by CSA for 200th Test Indian batting legend Sachin Tendulkar is set to be honoured by Cricket South Africa (CSA) later this year when he will take the field for his 200th Test match.

The second Test of India’s tour of South Africa, beginning in November, is likely to be Tendulkar’s 200th. The Little Master will enter the tour on 198 caps.

CSA President Chris Nenzani revealed the plans and as quoted by Deccan Chronicle, he said, “We will definitely be honouring this icon of world cricket and we will announce plans after discussions with the BCCI (Board of Control for Cricket in India) and their national team management”.

However, the BCCI is yet to approve CSA’s plan to host three Tests, seven ODIs and two T20 matches from November to January.

“We are waiting to hear from the BCCI and will make an appropriate announcement in due course”, he added.

Tendulkar, who has scored 15,837 runs in 198 Tests so far, has already retired from T20s, One-Day Internationals (ODI) and the Indian Premier League (IPL). 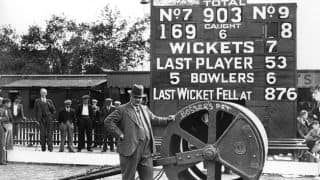