“I fail to understand why Dhyan Chand was ignored and Sachin Tendulkar was given Bharat Ratna,” JD-U’s member of parliament Shivanand Tiwari told media persons in Patna.

Tiwari said the ministry concerned had shortlisted the name of Dhyan Chand for giving the Bharat Ratna.

“Dhyan Chand was incredible for having taken hockey to international level for the country when there was no corporate and powerful media. His magic impressed even fascist leaders of Germany who offered him money, comfortable and luxurious life but Dhyan Chand stuck to India,” he said.

“Sachin Tendulkar was not playing free of cost. Sachin has made crores of rupees by helping corporates to market cricket in the country,” Tiwari said.

Tiwari said the Bharat Ratna has lost its importance now.

“It is time for a nationwide debate on Bharat Ratna and to whom it should be given. If latest trend is any indication, then it could be given to any corporate sponsored leader,” Tiwari said.

After Tiwari questioned the Bharat Ratna awarded to Tendulkar, JD-U spokesperson said the party has nothing to do with Tiwari’s statement.

Scientist CNR Rao and cricketer Tendulkar will be conferred the Bharat Ratna on India’s Republic Day in 2014. Their names were announced on Saturday, the day Tendulkar played his 200th and last Test match of his career in Mumbai at Wankhede Stadium. 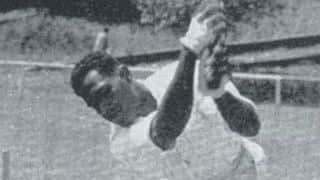 IL Bula: Fiji’s most famous player with the longest surname in First-Class cricket