Tendulkar, who retired from international cricket in 2013, continues to remain the fountainhead of inspiration to cricketers as well as cricket fans around the world. He turned 44 on Monday.

Sachin Tendulkar, who remains an inspiration to over 1.25 billion Indians as well as a million others around the globe, turned 44 on Monday. On this occasion, the social media platforms were flooded with birthday wishes to the cricketer who is fondly known as the God of Indian cricket. Millions of his fans tweeted their wishes to the batting maestro and in no time, #HappyBirthdaySachin became the top trend on the micro-blogging site. Apart from scores of his fans, Tendulkar s former teammates and colleagues from the cricket fraternity also took to their Twitter handles to wish him on his 44th birthday.

A rare occasion when one could have committed a crime,God ji sleeping.To a man who could stop time in India, #HappyBirthdaySachin @sachin_rt , wrote Virender Sehwag on his Twitter handle.

A rare occasion when one could have committed a crime,God ji sleeping.To a man who could stop time in India, #HappyBirthdaySachin @sachin_rt pic.twitter.com/CfPtEKbtSZ

Sehwag, a Tendulkar prot g e and often referred to as his lookalike, was privileged to open the innings with the master blaster for a long time.

Many more happy returns of the day @sachin_rt , April 24th should be marked as Indian cricket day. I was lucky to have played along side you Ashwin Ravichandran (@ashwinravi99) April 24, 2017

Tendulkar’s close friend and teammate at India and Mumbai Indians, Harbhajan Singh also had a special message for him.

#HappyBirthdaySachin. One of the most inspiring sportsmen the world has seen. Hope you have a splendid year ahead @sachin_rt. pic.twitter.com/ObqfqBA40k Anil Kumble (@anilkumble1074) April 24, 2017

Wishing #MasterBlaster @sachin_rt a birthday filled with happiness, may your life be brighter with each passing day#HappyBirthdaySachin pic.twitter.com/lPiuLqSiuJ

Gujarat Lions (GL) skipper Suresh Raina posted his tweet along with the photograph taken after the World Cup 2011 win.

There were others too, both Tendulkar s former teammates as well as the ones who played against him, who sent in their wishes:

Happy birthday master blaster @sachin_rt . You continue being inspiration to all of us. #SachinTendulkar #HappyBirthdaySachin pic.twitter.com/IpEVBfUqBR

Happy bday to the great @sachin_rt, 44 years young today. Hope you have a great day and year to come mate!

@sachin_rt may God Almighty continue to smile on you. A very happy birthday paaji, have a blast. #HappyBirthdaySachin

Happy birthday legend @sachin_rt. Thank you for being an inspiration . Have a blessed year.

”I’ve always looked to him for advice, to show us the way.”@ImRo45 on @sachin_rt guiding the team! #CricketMeriJaan #HappyBirthdaySachin pic.twitter.com/A4aJK2flDl

Tendulkar, who retired from international cricket in 2013, continues to remain the fountainhead of inspiration to cricketers as well as cricket fans around the world. 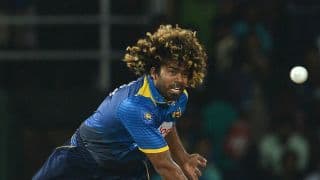