Twenty-five years after Sachin Tendulkar and Vinod Kambli made the then world-record partnership of 664 runs, the score sheet of the match has been burnt and the history has been lost forever. Vinod Kambli (left) and Sachin Tendulkar had set the then world record 664-run partnership on February 24, 1988 in a Harris Shield tournament match AFP

Twenty-five years after Sachin Tendulkar and Vinod Kambli made the then world-record partnership of 664 run, the score sheet of the match has been burnt and the history has been lost forever.

Playing for their school Shardashram Vidyamandir against St. Xavier s in a Harris Shield match organized by Mumbai School Sports Association (MSSA), Tendulkar and Kambli had set the record on February 24, 1988.

According to Hindustan Times, the MSSA has done away with the original sheet of the historic feat, stating that it was just another school game and the score-sheet was incinerated alongside other such old documents.

“The score-sheet was kept along with all the other records of games, and has since been incinerated as we could not store them all. You cannot expect us to store files that are 25 years old,” MSSA cricket secretary HS Bhor claimed.

Even though the original sheet has been lost, the details of the match have been maintained by Marcus Couto, co-founder of the Association of Statisticians and Scorers of India. 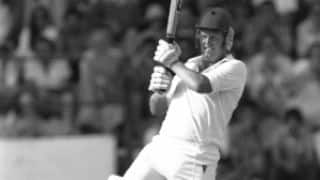 Graeme Pollock: One of the two left-handers Don Bradman admired the most

India and Australia arrive at Hyderabad for 2nd Test