The camp will also see former Mumbai cricketers involved in the talent-spotting camp.

Sachin Tendulkar and his Mumbai school team-mate Vinod Kambli will always be remembered for their record 664-run partnership for Shardashram Vidyamandir in the 1988 Harris Shield semi-final against St Xavier s High School, Fort.

Now, Tendulkar and Kambli, who earlier shared a frosty relationship, are going to rekindle their partnership of a different kind back on the field. According to a report in the Mumbai Mirror on Monday, Tendulkar is all set to start his own coaching clinic, along with Kambli, on the same maidans of Mumbai where he once learned the tricks of the trade.

Vinod and I have played together from the time we were in school. When we met recently, I told him about my project and Vinod readily agreed to contribute. I am delighted to have him on board, Tendulkar was quoted as saying in the report.

The coaching camps which begin from November 1 to 4 at DY Patil Stadium, Nerul, and November 6 to 9 at MIG Club, Bandra, for age groups seven to 17 and 13 to 18, will be launched in collaboration with County side Middlesex. The camp will be officially called the Tendulkar-Middlesex Global Academy, which will also be a talent-spotting camp. The camp will also be held in Pune from November 12 to 15 and November 17 to 20.

When Tendulkar approached Kambli with his proposition, the southpaw immediately gave him his word. “I immediately said yes when Sachin discussed the idea of coaching together. It’s a great opportunity to go back to the maidans with him and re-live our days there. I hope to teach the kids what Achrekar sir [Ramakant Achrekar] taught us when we were their age. I thank Sachin for showing faith in me,” Kambli said.

Very excited to coach the kids at the @tendulkarmga camps taking place in Mumbai & Pune, starting soon. Me and @sachin_rt will be starting a new innings where we will mentor the kids together. Hoping this partnership is as big as the one we had at Azad Maidan in 1988. #TMGAIndia pic.twitter.com/ANT5MF6Jqi

Having Kambli back on the field once gain does evoke fond memories for Tendulkar. “Having Vinod on the cricket field with me will definitely bring back some very special memories,” Tendulkar said. 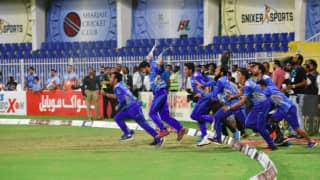