The fascinating narrative is augmented by photographs from important landmarks from Sachin's life.

New Delhi: After breaking many sales records since its release in November last year, iconic cricketer Sachin Tendulkar‘s autobiography ‘Playing It My Way’ will now enthrall Hindi readers with the book’s version in the language — ‘Meri Atmakatha’ — set to hit the stands next month.

The Hindi edition, which was released by Manjul Publishing House at the ongoing World Book Fair in the national capital today, will be available at all book stores from March 1. The Hindi translation is done by Dr Sudhir Dixit, who has also translated the blockbuster Harry Potter series of books in Hindi, amongst many other very popular translations. The original English edition, which was co-authored by journalist Boria Majumdar, was published by Hachette India.The Tamil translation of the popular book, also being published by Manjul Publishing House, will be launched on March 20.

“This engrossing Hindi translation is a collector’s item and one that every cricket-worshipping fan must read,” says Vikas Rakheja, Managing Director of Manjul Publishing House.

Hindi readers have a lot to cheer about when they read the journey of the Mumbai boy who became the ‘God’ of millions.

In this fascinating account, Tendulkar, reflects upon his own life from his boisterous and carefree childhood, humble but decent and principled upbringing, his initial tentative steps into cricket.

The Master Blaster also elaborates about his matchless and spotless cricketing career, to his emotional final farewell and its millions of followers and fans, his being conferred the highest civilian award the Bharat Ratna on the day of his retirement. The book dwells on the story of how a naughty Mumbai youngster’s excess energies were channelled into cricket, the record-breaking batting exploits of schoolboy Sachin, that launched the career of a cricketing phenomenon.

Before long, Sachin became the cornerstone of India’s batting line-up and his every move was watched by a cricket-crazy nation’s devoted followers. His countless achievements include winning the 2011 World Cup for India and topping the world Test rankings. Taking the reader deep into the personal and public life of Sachin, the book is a wonderful collection of personal anecdotes, stories from the dressing room, Sachin’s views on the Monkeygate controversy and much more.

The fascinating narrative is augmented by photographs from important landmarks from Sachin’s life. 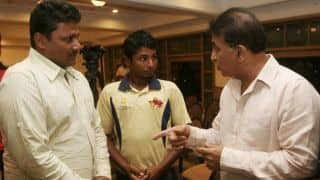