As the debate on whether Sachin Tendulkar should retire continues, former New Zealand captain and batting great Martin Crowe expressed the view that the Indian maestro was "naturally slowing down" due to age but "he can fix" the problems. 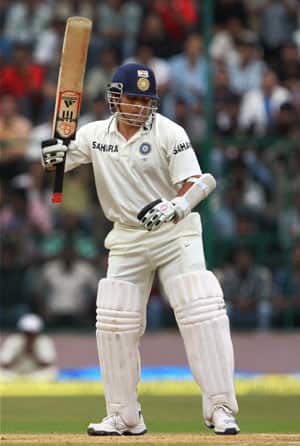 As the debate on whether Sachin Tendulkar should retire continues, former New Zealand captain and batting great Martin Crowe expressed the view that the Indian maestro was “naturally slowing down” due to age but “he can fix” the problems.

“Hand-eye reaction is not Tendulkar’s problem; he probably is better and faster with his hands than he was in 1992. But the one thing that he can’t escape from is that the body is naturally slowing down,” Crowe, one of New Zealand’s finest batsmen who scored 5444 runs in 77 Tests, said.

“Firstly, the back and hamstrings are probably 10 percent less flexible, and his agility and speed down by 10 percent too. Tendulkar will naturally find that he is not as quick as before. In particular, it is against fast bowling that his feet and body will find it increasingly hard to move quickly enough into position,” Crowe wrote in his column for ESPN Cricinfo.

Crowe felt that Tendulkar, who has scored 100 international centuries, won’t face any problems whatsoever from the spinners as he is as good as anyone in the world.

“Against spin, he is absolutely fine and as good as anyone in the world. But despite batting brilliantly against Australia’s fast men at the start of the year, a pattern began to emerge as to his dismissals: playing on, lbw, cleaned bowled.

“Now, nine months on, every team’s analyst will tell every fast-bowling attack that, as New Zealand showed in recent weeks, anything over 135km pitched up full and his feet and body won’t respond quickly or for long enough, anymore,” Crowe cautioned.

Crowe said that Tendulkar has lasted much more than some of his contemporaries is because of his “astonishing, insatiable love for the game.”

“The hunger to continue to score runs for India, the desire to train just as hard as he used to, the mental toughness to put the unprecedented expectations aside – they are all phenomenal attributes,” he wrote.

One of the finest among batsmen of 80’s and early 90’s, Crowe is hopeful just like Sanjay Manjrekar that the master batsman would work his way out of the trouble.

“The problem is, like many fine players before him, once it starts it can all come crashing down in a hurry if awareness is not first embraced. As Sanjay Manjrekar rightly pointed out, Tendulkar should work his way out of this hole he is in.”

Crowe also explained a minute technical point that he feels Tendulkar should work upon.

“Technically, his backfoot, and in particular his right heel, is planted to the ground. It is not moving with his frontfoot, it is arriving too late. His frontfoot moves and hovers forward as the ball is released, therefore both his feet point to the off side not straight to the ball, and then inadvertently he starts playing around his front foot and is either missing it or getting lbw.”

But Crowe at the same time pointed out that how this technical issue could be sorted out.

“…he can fix it. He can get up onto his toes more and he can start to move his back foot fractionally up and down to get it activated. This will help him to start to move both feet when the ball is closing in.” (PTI)