Kerala engineer took to social media campaign to reach out to Tendulkar.

It took a football enthusiast and an avid Sachin Tendulkar fan to influence the Master Blaster in buying a stake in the Kochi Franchise of the Indian Super League, a franchise-based football tournament. 30-year-old Rijin John created a social media campaign with a 107-second long video uploaded on YouTube. His intention was to bring one of the franchise to Kerala. This video was watched by Tendulkar which influenced his decision to partner with PVP in owning the Kerala franchise.

“Rijin and his team were sending us mails for several months. We passed the Sachin Irro video link to Sachin who was aware of their campaigns. Sachin too has a passion for football. And Team Rijin was doing the campaigning as a service. It was brilliant,” a top Reliance official was quoted as saying by Times of India.

“Initially, my effort was to make sure that Kerala doesn’t miss out on any chance. I knew there will be eight ISL teams. We tried to find an investor in Kerala to invest. We failed but the fight was on and I opened a backroom channel with Reliance, the sponsors along with IMG for the ISL. It worked. Indeed we were a headache for the Reliance team and finally they helped us to reach Sachin through various campaigns,” said Rijin.

“Once we confirmed that Sachin was interested to bid with PVP Ventures of Hyderabad (which also owns Hotshots, a Hyderabad franchise in Indian Badminton League), we started a facebook page to show support for Tendulkar’s bid. We really feel that Sachin’s presence will be like a blessing to Kerala football,” John said. “Sachin Irro was launched on April 3 to seek support from Keralites who are all over the world. Now if you look at facebook there are not big football fans less than 1000 but we’ve corporate groups,” he added.

Rijin believes, the ISL will bring untapped talent at the grassroot level and his idea was to give a grassroot programme. “Tendulkar’s presence will take the game to a higher level. I’m sure his presence will do a world of good for the game. He has been inspiring generations for years together and now this role will inspire kids and I’m sure Kerala will make India an impact in 2022 World Cup,” he concluded. 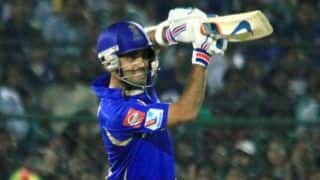