Sachin Tendulkar's record will be broken one day: Kapil Dev

Sachin Tendulkar's record will be broken one day: Kapil Dev

Sachin Tendulkar's feat of 100 international centuries might seem impossible to scale, but former India skipper Kapil Dev said the "human race would fall behind" if the record is not broken in times to come. 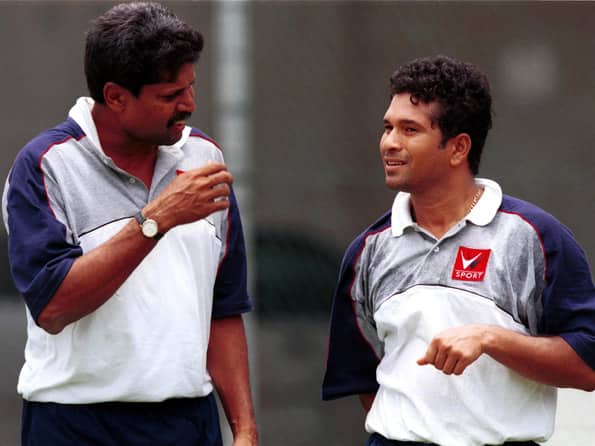 Sachin Tendulkar’s feat of 100 international centuries might seem impossible to scale, but former India skipper Kapil Dev said the “human race would fall behind” if the record is not broken in times to come.

Giving example of Sunil Gavaskar’s “seemingly unconquerable” 34 Test centuries before it was eclipsed by Tendulkar, Kapil said, “In our time we used to think, can anybody ever go past Sunil Gavaskar?”

“But it happened, it’s happening and it will happen for sure. Records are meant to be broken. Sachin has achieved such a big milestone; if nobody breaks it then the human race will fall behind. We are waiting for the day when somebody will come and break Sachin’s record,” India’s first World Cup winning skipper said.

Addressing a gathering of students, who cracked medical and engineering entrance exam, Kapil said being talented is not enough and it’s important to plan one’s career.

Citing the example of Vinod Kambli, Kapil “When I was about to stop playing cricket, two players came into the limelight, one was Sachin Tendulkar and the other was Vinod Kambli. Media heralded them as the best to have played for the country.”

Sometimes, you have the talent but if you don’t understand yourself, you can’t become Sachin Tendulkar. You have to have a role model. But that is not the end as you have to go beyond your role models,” Kapil pointed.

The former cricketer urged the parents to support their kids in their endeavour and hailed the partnership between the children and their parents as the important one.

“The parents play an important role. It’s the partnership with your kids, the understanding with them that’s very important. Today my daughter is my best friend. She is much wiser than me in terms of technology. So I also respect her,” he insisted. (PTI)

Bowlers put Pakistan on top on day one

Ganguly feels Bhupathi should have partnered Paes in Olympics