Rival captains Misbah-ul Haq and Graeme Smith both agreed Pakistani off-spinner Saeed Ajmal will be the key in the two-Test series starting on Monday. 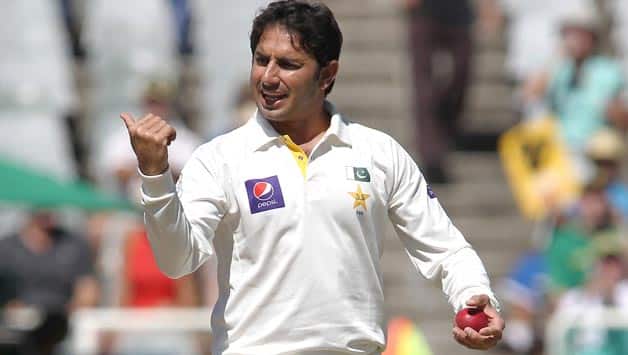 Ajmal, who turns 36 on the first day of the match, took 24 wickets when Pakistan humbled then world number one England 3-0 in the UAE last year © Getty Images

Rival captains Misbah-ul Haq and Graeme Smith both agreed Pakistani off-spinner Saeed Ajmal will be the key in the two-Test series starting on Monday.

Ajmal, who turns 36 on the first day of the match, took 24 wickets when Pakistan humbled then world number one England 3-0 in the United Arab Emirates last year.

But Misbah urged his wily spinner to lift his game.

“I think it [bowling to South Africans] will be a big challenge for Ajmal,” said Misbah at the unveiling of the trophy for the series. Misbah conceded South Africans play Ajmal better than English batsmen.

“He (Ajmal) was new to England and that’s why they struggled against him. South Africans have played him more, so it’s a big challenge for Ajmal and he will have to lift his bowling because he is up against a team who plays him well,” said Misbah.

Excluding his ten wickets on a spin-friendly Cape Town pitch earlier this year, Ajmal has only four wickets in four Tests against South Africa.

Smith agreed his batsmen play Ajmal well, but the off-spinner can still pose a challenge.

“I think last time we were on this tour, we played Ajmal really well and I think he ended up missing a few games on the tour,” said Smith of South Africa’s last series here in 2010 when Ajmal was dropped after taking only three wickets in the first Test.

“He still is a key performer for Pakistan and he’s a world class performer… it’s real respect factor for what he can do… he’s a world class bowler, I think we’ve had a good success against him and that’s nice to know,” said Smith, who returns to international cricket after a 21-week break following an ankle operation.
But besides Ajmal, Pakistan also has the option of playing two more spinners — both left-armers — in Abdur Rehman and Zulfiqar Babar.

Babar, at 34, has yet to play a Test but has been a prolific wicket-taker in Pakistan’s domestic season.
Smith admitted he didn’t know what to expect of Babar.

“He (Babar) is probably the unknown factor for us, we’ve got a little bit of footage of him, some of our guys have seen him bowl before, but until you’ve really played against someone there’s always an unknown factor,” said Smith, whose side has been unbeaten away from home since losing 2-0 in Sri Lanka in 2006.

“We haven’t dwelled on any of sort of past experiences away from home, but I think every time you do overcome winning away from home, there’s a certain strength that you get as a team.”

Smith played down any pressure of being the world’s best Test team.

“I would say only the pressure we put on ourselves, I mean naturally, is an expectation of performance,” said Smith whose team took over as number one from England last year.

The second and final Test will be played in Dubai from October 23. Both teams will also play five One-Day Internationals (ODI) and two Twenty20 Internationals.

Sachin Tendulkar and the Argumentative Indian – Part 2 of 2