Saeed Ajmal was suspended from bowling in international cricket on Tuesday.

The ban imposed by the International Cricket Council (ICC) on spinner Saeed Ajmal for illegal bowling action is a deadly blow to Pakistan‘s ‘threatening bowling’ unit, feels former skipper Rashid Latif. Latif said on Tuesday that the ban was a major setback for the Pakistan team, which lacks quality spin options ahead of the impending tour of Australia in October and the crucial ICC World Cup 2015 which is just five months away.

“The sad part is that we haven’t tried any other specialist off-spinner in international matches and now our World Cup plans are severely dented. Pakistan bowling is finished without Ajmal. I had doubts for the last few months … because the way he bowls it’s hard to get away with in Test matches,” Latif was quoted as saying by Cricket Australia’s (CA) official website.

The ICC confirmed that an independent analysis has found Ajmal’s bowling action to be illegal and, as such, the player has been suspended from bowling in international cricket with immediate effect. The analysis revealed that all his deliveries exceeded the 15 degrees level of tolerance permitted under the regulations.

Latif doubts whether there was enough time for Ajmal to rework on his bowling action, be tested again and cleared by the ICC before the World Cup that starts Feb 14.

After Australia’s tour in October, Pakistan will be hosting New Zealand in the United Arab Emirates (UAE), where Ajmal had picked up 67 wickets in 12 Test matches. The Pakistan Cricket Board (PCB) has formed a committee to identify and help bowlers with suspected action and help them remodel their action.

Former pacer Mohammad Akram, spin bowling coach Mushtaq Ahmed and umpire Aleem Dar will be a part of the committee. In the past, Pakistan’s Shoaib Akhtar, Shoaib Malik, Shabbir Ahmed, Shahid Afridi, Mohammad Hafeez and Riaz Afridi have all been reported for suspect action. In 2005, Ahmed became the first bowler ever to be banned for a 12-month period after he was reported to the ICC twice in 12 months. Moeen Ali booed at Edgbaston: PCA chief asks him to take it positively 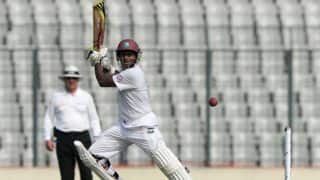