Sam Billings is undoubtedly being considered as one of the most skillful English batsmen in today's generation.

Sam Billings is undoubtedly being considered as one of the most skillful English batsmen in today’s generation, as he earns a good backing to be included in the Test squad for the upcoming India tour, as he is being considered as one of the star performers for the tour. However, Billings insists that he is still at a developing stage in the longer format of the game. Billings was struggling to be a part of the English ODI side, but during the recent ODI series vs Bangladesh, he displayed some great batting ability, especially when he was promoted top the order to open the batting. FULL CRICKET SCORECARD: India vs England, 1st Test at Rajkot

“It was great to contribute. I should have got 120 not out to win the game but that’s life and I would have taken 60 at the start. To be involved in another series win in difficult conditions shows how far we are coming along as a group. Everyone knew that Bangladesh had won their last six home series, including against India and South Africa, so it was no mean feat to win. People think it is only Bangladesh so you should just smack them around but, with Shakib Al Hasan, Tamim Iqbal and Imrul Kayes, they’ve got a seriously good side in their own conditions,” said Billings, reports espncricinfo.com.

On being asked if he would be able to handle the deadly spin form India’s spin stae at present, Ravichandran Ashwin, he said, “Obviously that is flattering. Playing spin is one of my strengths. Manoeuvring the ball around and putting spinners under pressure is one of my strengths, but the guys who are there have done it regularly in first-class cricket and are there for a reason.” India vs England: Rohit Sharma ruled out of Test series due to injury

Speaking on the new guys, Ben Duckett, and Haseeb Hameed, he said, “Haseeb hasn’t had an opportunity yet, and to have a long run at it too,” he said. “These guys have done it over and over in first-class cricket. But any time England calls you just get on a plane and try and get the job done.”

He was asked if his stint with Delhi Daredevisl (DD) in the cash-rich Indian Premier League (IPL) helped him, he said, “The IPL was huge for that. It is different to a Test match but the basics don’t change: your footwork is paramount. I was very fortunate to work with Rahul Dravid in the IPL and pick his brains on playing spin. At some points we moved the stumps back and had the used crease to play with and he said, ‘if you can bat on that you can bat on anything’. This is one of the reasons [Trevor] Bayliss and [Andrew] Strauss are pushing us to go over there. Yes it is T20 cricket but it is about the environment and learning how those guys go about it.” IND vs ENG: Under pressure BCCI forced to take precautionary measure

Talking more on playing spin, Billings continued to add, “Graham Thorpe and Andy Flower may be two left-handers, but they were great players of spin, especially against offspin with the turning away from the bat,” he said. “The basics don’t change, you have to get as close to the ball as possible or as far away from it as possible using the depth of the crease. For me, I identified two years ago that left-arm spin was a really big area I needed to work on,” he said. “The ball going away or sliding on is generally more difficult for a batter when it is turning.”

Billings faced former New Zealand’s left-arm spinner, Daniel Vettori, in UAE in 2015 at the England’s Performance Programme, as he talked about the experience. “We had a hybrid pitch that was ragging square. He was bowling at a good pace, it was seriously tough, and that’s when you work out what’s good for you.”

Speaking more on the upcoming India tour, he said: “[Alastair] Cook, in his debut Test, got a hundred in India, so they’ve got no better bloke to pick the brains of – although, of course, he does it a different way. Stokesy [Ben Stokes] is still one of the younger lads, even though it feels he’s been around for years, and in terms of his game against spin, he’s come on leaps and bounds and will only get better. We’ll all get better, the more we are exposed to it.”

“It’s finding different ways all over the place. I’ve got no doubt there are some seriously good players of spin there. It’s a different kettle of fish against [Ravi] Jadeja and Ashwin, but it’s been great to have had these two Test matches. We got out unscathed – yeah we drew, I know we wanted to win – but we’ll go into the India tour with preparation time. I’ve got full faith in the boys and they are definitely good enough to win.” 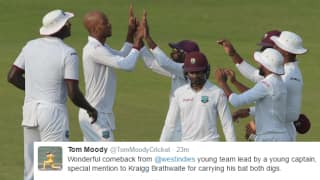 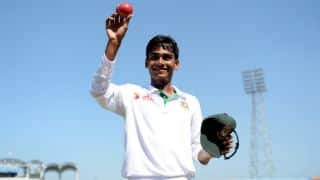