Ballance and Robson complete fifties in a productive session for England.

It was a productive session for England as they progressed steadily to 131 for one at lunch against India on Day Three of the first Test at Trent Bridge. India failed to pick any wicket in the session where 88 runs were scored. Sam Robson is unbeaten on while Gary Ballance is on. Similar to the previous two days, the wicket was flat and the batsmen had no problems.

It didn’t even take half an hour for the Indian pacers to feel convinced they will be toiling hard here. Bhuvneshwar Kumar and Mohammed Shami began the proceedings on the third morning. Thanks to the lack of pace, Balance looked much more comfortable standing out of his crease and facing the deliveries. Predictably, MS Dhoni moved up to the stumps to keep a check on Balance’s confidence.

Shami was particularly wayward bowling more on the leg-side. Bhuvneshwar in comparison was much more accurate and forced the batsmen to play even if it went for a few runs. Known for his reliance on swing, he tried to bowl wide of the crease and angled the ball in consistently to Sam Robson. Whereas for Ballance, Bhuvneshwar came over the wicket in search of that away going delivery which teases the left-handers. Both batsmen looked cautious at the start before Robson progressed to playing his shots and Ballance held on patiently.

Fielders soon deserted the attacking field positions and took to unorthodox field positions. Keeper standing close to the stumps, a wide slip, a short mid-on, two more fielders in an arc next to mid-on waiting for a flick from the right-handed Robson. But nothing seemed to work. Compared to the other two pacers, Ishant Sharma looked in good rhythm. He wasn’t wobbling around but delivered with a steady wrist position and often got a bit more bounce than others. He pitched it well against left-handed Balance but all of them were negotiated well.

After 17 overs in the third day, Dhoni turned to Ravindra Jadeja to make some use of the footmarks created by the pacers. Jadeja did what he does best, pitch consistently and tie one end up. He eventually managed to create the chance when an edge off Robson’s bat was grassed by Kohli at leg-slip. As the session progressed in to last half an hour, Ishant looked erratic and so did Stuart Binny which allowed a crawling innings from Balance to gain momentum. He was the first to complete his half-century with a four and Robson emulated the same in the next over.

Jadeja was the only bowler who looked wicket-taking and got the ball to turn more as the session came towards an end. 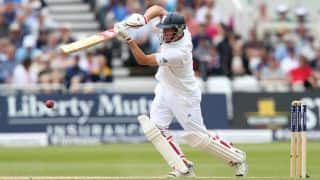 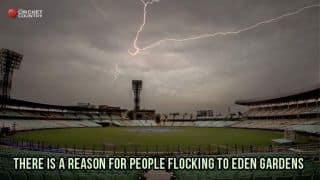