The ODI GOAT’s (Greatest Of All Time), which is poll contest conducted by cricket.com.au has entered its concluding stages as Indian batsman Virat Kohli has been knocked out of the quarter-final stage when pitted against Sanath Jayasuriya, who was one of the most explosive batsman of his time. Now Jayasuriya will take on master blaster Sachin Tendulkar, who is all-time run-scorer in international cricket. Jayasuriya has played 445 ODIs for Sri Lanka and has scored 13,430 at 32.36 with the help of 28 centuries and a highest score of 189. He also has 323 wickets to his name. Jayasuriya is  now a Member of Parliament and now a Minister as well. READ: Warne pips Muralitharan in ODI GOAT contest

Jayasuriya retired in from ODIs in 2011. Kohli on the other hand has a tremendous career in ODIs as well. He has the temperament and the knack of chasing down any score set by the opposition and his excellent ton at Hobart against Sri Lanka is a fine example of what he can do. Kohli lost to Jayasuriya by 47-53, which is based in the fans’ votes. Kohli has been backed by many to break all of Tendulkar’s record by the time he finishes his career. READ: Waqar acknowledges Wasim was the better bowler

The match up between Tendulkar and Jayasuriya is set to be a colossal one. If you think Jayasuriya has an impressive ODI record,  Tendulkar has a better one. In 463 matches in ODIs he has scored 18,426 runs at 44.83 with 49 fifties and 96 hundreds to his name. He also became the first player to score a double century in ODIs.

ODI GOAT, which is the official website of Cricket Australia has started a unique competition, where they have picked the top 64 ODI players of all time and have thrown it open to the fans to decide who the better ODI cricketer according to them is. 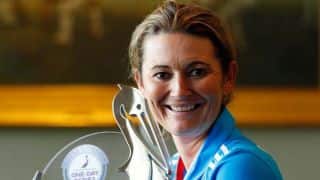