Clarke has been like a mentor to the 17-year-old Nepal leg-spinner who has scripted history with a Rs 20 lakh IPL contract with the Delhi Daredevils.

Michael Clarke claims to have done nothing but “smile” everytime he saw Sandeep Lamichhane bowl but Nepal’s first IPL-contracted cricketer says he owes his growth to the former Australian captain.

Clarke has been like a mentor to the 17-year-old Nepal leg-spinner who has scripted history with a Rs 20 lakh IPL contract with the Delhi Daredevils.

Clarke could never really warm up to the IPL like many of his fellow Australians. A graceful Test batsman, he played just one season with the now defunct Pune Warriors in 2012, scoring 98 runs in six matches.

“Michael Clarke has had the biggest influence on me as a cricketer. From the time, he saw me bowling at the Hong Kong Sixes, he kept an eye on me. He is a kind man, a humble soul, who has helped me grow as a cricketer and a person,” Lamichhane told PTI during an exclusive interview from Dubai.

Clarke, on his part, has been modest about the the “influence” that Lamichhane spoke about.

“I did nothing mate apart from smile every time I watched him bowl,” he had responded on Twitter when his role in his growth was pointed put.

Even before IPL players’ auction, Lamichhane had been in touch with Clarke, calling the interactions therapeutic to an extent.

“Speaking to him helped me relax. It was a lifetime experience to have played under him for Western Suburbs Cricket Club in Sydney grade league. That has been a huge gain for a young player like me,” he said.

The leg-break is his stock delivery but Lamichhane has become more confident about executing the googly as well.

“I always had a good leg-break but I have now developed an effective googly working hard with my Nepal national team coach Raju Khadka,” the teenager said.

“So when Delhi Daredevils summoned me for trials I was fully confident that their coaches would be impressed with my skills. And in any case if you don’t have self confidence, you can’t play the next level that is IPL,” he added.

While the tiny Himalayan nation still can’t boast of great cricketing facilities, Lamichhane said he is nonetheless indebted to Cricket Association of Nepal for backing him. 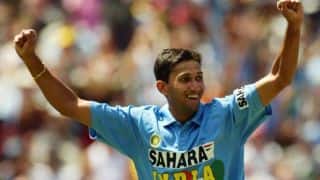