Nepal has dominated proceedings against Namibia so far in the World Cricket League Division Two encounter, . Nothing clicked whatsoever for Namibia including the coin toss. Electing to bowl, Nepal commenced the innings with early breakthroughs through Sompal Kami. A late collapse was effected by by Sandeep Lamichhane, Nepal’s star in the recently-concluded IPL 2018 auction, who returned with 4 for 18.

Namibia were reduced to 23 for 2 in no time. Zane Green and Craig Williams then initiated the repair work. They looked in good touch, and added 52 runs off 44 balls. Nonetheless, they were at sea once Lamichhane was introduced. He trapped Williams leg-before for 41. Namibia’s lower order posed no threat to him. From 80 for 3 Namibia folded for 138. Lamichhane finished with 4 for 18 (at 2.16 an over). Nepal should easily overhaul the target.

Lamichhane’s rise was predicted by Michael Clarke, no less. Lamichhane made news last month by becoming the first player from Nepal to earn an IPL contract in the auction held at Bengaluru from January 27-28. He was bought by Delhi Daredevils (DD) for INR 20 lakhs. 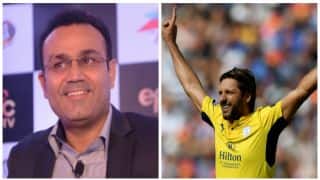