The two sportspersons had a bit of a banter on the micro-blogging website Twitter and were involved in an exchange of words after the former completed 80 consecutive weeks as the No. 1 doubles player in the world.

India s tennis sensation Sania Mirza is also known for her outspoken nature. She is one of those personalities who never mince their words and call a spade a spade. Such people, however, end up ruffling a few feathers in the process. A similar incident happened on Wednesday with the tennis star. On the receiving end was another known personality; Indian cricketer-turned-commentator Sanjay Manjrekar. The two sportspersons had a bit of a banter on the micro-blogging website Twitter and were involved in an exchange of words after the former completed 80 consecutive weeks as the No. 1 doubles player in the world.

It all started with Sania announcing her achievement late on Tuesday by taking to her official Twitter handle. She shared her happiness with her 4.51 million followers by tweeting: Today I complete 80 consecutive weeks as the number 1 player in d world. it s been an amazing journey and just inspires me to work harder @WTA . Though Sania s fans and all those who follow her game must have understood what she meant by being No. 1 player in the world, Manjrekar, it seems, was ignorant. His reply to her tweet suggested the same as Sania did not quite like it.

Today I complete 80 consecutive weeks as the number 1 player in d worldits been an amazing journey and just inspires me to work harder @WTA pic.twitter.com/BsHoeU0YAT

Though Manjrekar did wish her on the achievement, his tweet was in a bad taste, as he seemed more interested in getting into the details and reminding Sania that she is World No. 1 in doubles category and not singles, which is considered to be more prestigious. Sania did not take his tweet too kindly and responded in the similar manner, hinting it is not common to have common sense and she should have known that. Later, in another tweet, she even thanked Manjrekar for the wishes though. She wrote:

Since I don’t play singles anymore isn’t that obvious/common sense?my bad,common sense is not that common after all I guess.. 🙂 https://t.co/fXhnaQZEM7

Hey.. But thanks for your wishes though ofcourse https://t.co/fXhnaQZEM7

This did not end here, as Manjrekar again replied to her tweet, again pointing out at the vital details she did not share:

Well, you missed out an important detail for someone like me who lacks common sense 🙂 https://t.co/nLgRFONxrn

Sania, acknowledging Manjrekar s lack of common-sense, came up with another tweet which had the link of an article on her achievement. She wrote:

But Manjrekar did not stop here and it seemed as if he wanted to have the last word on it. He wrote once again:

Yes, the article also says No. 1 doubles player in the world. Said what I had to, will leave all balls outside the off stump alone now https://t.co/LP37fxYE0s

The war of words has stopped for now. But whether this is a complete closure or just a ceasefire, time will tell. 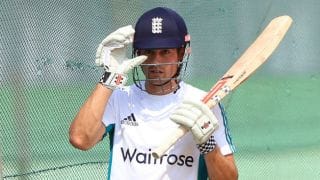