Vijay Manjrekar is remembered as one of India's finest players of fast bowling.

Vijay Manjrekar is remembered as one of India’s finest players of fast bowling. A man of diminutive frame, he was a fine cutter and puller of the ball. Vijay went on to play 55 Tests for India in between 1952 and 1965, scoring 3,208 runs at 39.12. Having played First-Class cricket for seven Ranji sides, he amassed 38 hundreds. He was prolific in Ranji Trophy where he averaged 57.44. He could bowl off-spin and also keep wickets. There is another side to the man, who was once a national star.

His son Sanjay, now a noted cricket expert and commentator, appeared in 37 Tests and 74 ODIs for India as well. Though Sanjay inherited a lot of these skills from his famous father (he was even a reserve wicketkeeper, just like Manjrekar Sr), the relationship between the two was not ideal one. He was terrified of his father and recalls that one “overpowering emotion” to describe the bond was “fear”.

In his autobiography Imperfect, Sanjay detailed out on the father-son relation. Here are the excerpts from the book.

“I had no relationship with my father to speak of. The overpowering emotion that I felt towards him was fear. It is easy for me to say it now as a 50-year-old father of two, but as a child, an adolescent and a young adult, I was terrified of my father. I have made peace with it for a long time now. Vijay Laxman Manjrekar, who played 53 tests [55, actually] for India and notched 3,208 runs at an average of 39.12, was a troubled soul post-retirement. A disturbed, frustrated and angry man is what his three children had as a father.

“Yet, he would often be a profoundly wise man. In the few conversations we had, he would tell me, ‘Treat cricket as a game, not as your life.’ He obviously said this from his own life experiences. We, his family, could that he had made cricket his life. He was not quite prepared for life outside cricket. It’s sad that in this sport you can, at best, have a career at the top for ten to fifteen years, and even that career comes to an end in the prime of your normal life, in your mid-thirties. My father had no other skills; he struggled to find his place in the world after his playing days, and that included the cricketing world too.

“He was highly respected and famous cricketer. Life after cricket must have been tough for him. He now had to work nine-to-five in a public-sector company, but at heart he was artist. It was like asking a lead guitarist to sit behind a desk and do a clerk’s job. He tried, but he wasn’t cut out for it.”

“At one stage, he tried his hand at cricket coaching, but he didn’t possess the tact required to handle cricketers. A story goes that once former India opener Chetan Chauhan came to him for some advice. ‘Sir, what’s wrong with my batting?’ Chauhan asked. My father told him, ‘There is nothing wrong with you, but something is wrong with the selectors: they picked you.’

“The coaching stint came to an abrupt halt: On a tour to England as coach and manager of the India Under-19 team he slapped a player. He never got the job again. The player in question was well known to my dad. And he didn’t mind it at all. But the media was not going to let this pass. Moreover, it infuriated him that he was not famous anymore and had no skills outside cricket to earn him the respect he once commanded as a cricketer.”

“Of course, all this I came to realize only much later. As a child, I — along with my mother and two sisters — only remember having to bear the brunt of his mood swings and temper. We lived in the fear of showdowns — often it made us dash towards the windows to close them lest the neighbours heard us. Some of these showdowns even got violent.

“There was road rage too. My father would frequently get into fights with other motorists. And when I say fights, I meant it literally — ones that involved an exchange of blows. He prided himself in having earned his driving license in England, and could not tolerate undisciplined drivers on Indian roads. Another thing that would really rile him while driving was the high beam of headlights form the car(s) behind his — its reflection in the rear-view mirror would go straight into his eyes. Whenever this happened, we would all tense up. We knew where this was all going to lead. He would then start waving his hand vigorously out of the window, asking the driver behind him to lower his beam. We would start praying, ‘Please do it, please do it.’ As with most prayers, this would never work. At some point, my father would allow that driver to overtake him. Then he would speed up to be within shouting distance. Then, in the choicest Marathi, my father would tell him what he thought of him. Some of the motorists would speed away out of fear, but there were always enough people to give it back to him. And then all hell would break loose.

“My father would stop the car, step out, and from the boot of the car take out something called as a crock lock. It was a device he had bought from England. It was made of solid, heavy iron. It was about four feet long with umbrella-like hooded handles on both sides. One end of it was meant to be stuck in the steering wheel, and the other around one of the pedals of the car — the clutch, the brake or the accelerator. It was a security gadget against car theft, but it hardly protected my father’s car. Instead it lay silently in the boot of the car until it was called upon to inflict injury on another human being.

“Fortunately, my father never managed to land a serious blow with that Crook Lock as invariably a crowd would gather around such a scene. That ensured the fight ended with only some grappling and some missed punches. My sisters or my mother would sometimes get out of the car to calm him down and pull him back inside the car, but an angry man is a strong man, and these attempts were largely unsuccessful.”

Vijay Manjrekar passed away in 1983 at the age of 52. Sanjay was only 18 then. A year later, he broke into the Mumbai Ranji side before making his international debut in 1987. 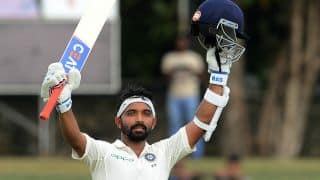