Defending champions England today lost to New Zealand by 13 runs in their warm-up game ahead of the ICC Women's World Cup at the Bandra Kurla Complex ground here. 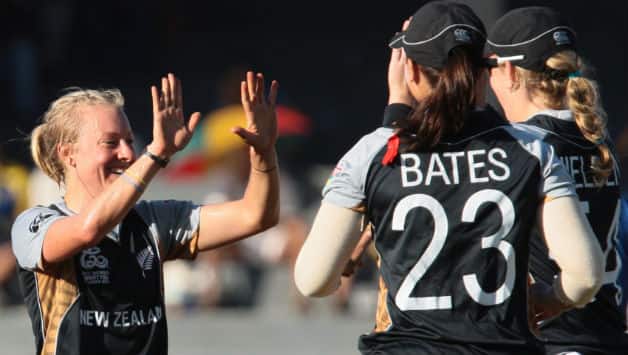 Defending champions England today lost to New Zealand by 13 runs in their warm-up game ahead of the ICC Women’s World Cup at the Bandra Kurla Complex ground here.

Chasing New Zealand‘s 223, England started poorly by losing two early wickets but recovered via a 87-run partnership between wicketkeeper Sarah Taylor (32) and Lydia Greenway (51) before both fell in quick succession.

Struggling at 152 for seven, England rallied courtesy a quick 48-run stand in just six overs between Jenny Gunn (35) and Tammy Beaumont (22) which brought them close to the target.

However, Beaumont was dismissed by Kiwi captain and medium pacer Suzie Bates with score at 200 for eight. Number 10 Danielle Hazell’s stay at the crease wasn’t long as she went without troubling the scorers.

Gunn was the final wicket to fall for England when she was run out with eight balls left. She hit a six and three fours in her 34-ball knock.

Earlier, middle-order batswoman Sara McGlashan slammed 10 fours and a six in a quick-fire 88 off just 90 balls to help New Zealand recover from 117 for 5.

She was ably supported by Nicola Browne (40), with both adding 92 runs in 16.5 overs for the sixth wicket.

Opener Lucy Doolan made a steady 57 off 77 balls but the Kiwis lost regular wickets before they rallied through McGlashan and Browne.

Off-spinner Hazelle dismissed McGlashan as well as four other lower order batswomen to end up with splendid figures of 5 for 41. Browne was run out off the final ball of the innings.

While England would remain in Mumbai to commence their campaign in Group A of the competition that begins January 31, New Zealand would travel to Cuttack to play their Group B games.