Pakistan are at the brink of whitewash as they are struggling at 176 for six at Tea on Day 3 of the third test at Centurion on Sunday. 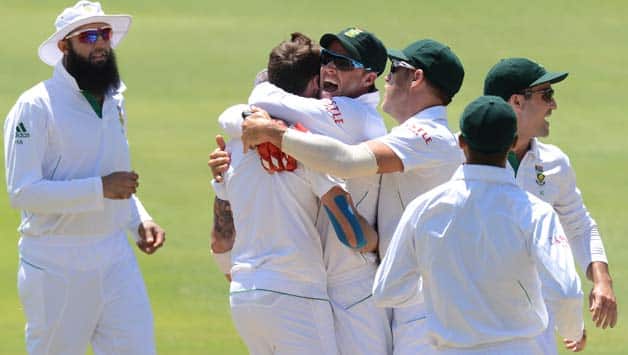 Pakistan are at the brink of whitewash as they are struggling at 176 for six at Tea on Day 3 of the third test at Centurion on Sunday. Following on, Pakistan are still 77 runs behind to make South Africa bat again.

After a hard fought first session, the visitors showed no intention of continuing the fight. Imran Farhat and Asad Shafiq who looked good to continue their steady partnership gave their wicket away when Azhar Ali was run out for 27 runs. A confusion between Ali and Farhat led to the latter asking Ali to go back, but it was too late as Dale Steyn’s throw was on target.

Farhat, who had batted hard to build his innings, threw his wicket away giving Kyle Abbott his first wicket in the second innings. Skipper Misbah-ul-Haq didn’t last long after Rory Kleinveldt tested the batsman with accurate deliveries before he edged one to AB de Villiers. Asad Shafiq added one more tally to Kleinveldt’s figures as he completely miscued his shot as the ball popped up in the air right in front of Vernon Philander at mid off.

After a flurry of wickets, Saeed Ajmal and wicketkeeper Sarfaraz Ahmed stitched an unbeaten 62-run partnership to take the match beyond Tea.