Pakistan captain Sarfaraz Ahmed has been sent to the hospital for precautionary scans after copping a blow on the helmet.

Pakistan captain Sarfaraz Ahmed has been sent to the hospital for precautionary scans after copping a blow on the helmet while batting in the second innings against Australia on Day 3 of the ongoing second Test in Abu Dhabi.

Sarfaraz was batting 32 when he ducked into a short delivery from Peter Siddle but the ball didn’t rise as he anticipated and instead crashed on his helmet. He needed attention from the team physio and then continued batting before being out on 81 off 123.

However, he complained of headache after waking up on Friday following which he was taken to the hospital. He didn’t take field on Day 4 and Mohammad Rizwan has taken the wicketkeeping duties. Asad Shafiq is leading Pakistan in his absence.

Meanwhile, Usman Khawaja faces the prospect of missing the start of Australia s home Test series with India from December 6 with surgery the likely requirement for a meniscal tear on his left knee.

The batsman twisted his left knee during throw-downs before the start of day three and will meet a knee surgeon upon return to Australia. If he undergoes surgery, Khawaja could be sidelined for anywhere between six weeks to three months. 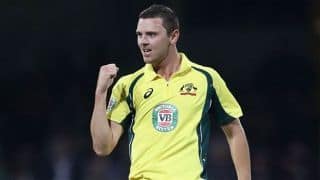