Sarfaraz was adjudged Man of the Match for scoring 74, taking four catches and picking up a wicket.

India U19 won by 40 runs
Man of the Match: Sarfaraz Khan

Saturday was a big day in the life of Naushad Khan. After all, his son, Sarfaraz Khan, was playing a landmark game against Pakistan.

Naushad, a cricket coach, did not step out of his modest Kurla home all day. He even switched off his cellphone! Hellbent on watching every ball of India’s ICC Under-19 World Cup 2014 opener against their arch-rivals, he hoped his son would do the star turn. He promptly installed a video-camera in front of the telly and recorded the game.

By the end of the day, Naushad was a happy man. Not only did India win handsomely, but Sarfaraz was also adjudged Man of the Match for scoring a 74 (78 balls, 5×4, 1×6), taking four catches and picking up a wicket at the Dubai International Cricket Stadium.

Naushad found it difficult to hide his joy. In fact, so busy was the family that they even skipped lunch. “People were ringing us constantly. But I didn’t want to be disturbed and I shot the whole match with my handy-cam. That’s why my phone was turned off,” Naushad said.

Munching on chicken pakoras after the game, he spoke about Sarfaraz’s performance. “When Sarfaraz walked in, the team was in a spot of bother (94/4). He had to play the waiting game. I am glad he played a crucial knock to bail his team out of trouble. The wicket was two-paced — while one end offered bounce, the other didn’t. Having played on the uneven tracks of Azad Maidan, Sarfaraz was well-equipped to face the challenge,” the proud father said.

So was he satisfied with his son’s performance? “I can never be satisfied. He should have gone for a hundred and stayed there till the end,” the taskmaster in Naushad said.

Naushad had advised his son to treat the Pakistan game like any other contest. “I told him not to be nervous. Treat it like just another game at Azad Maidan,” he had told Sarfaraz. 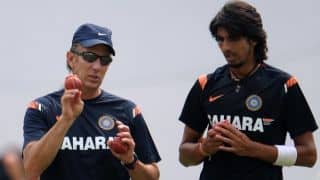 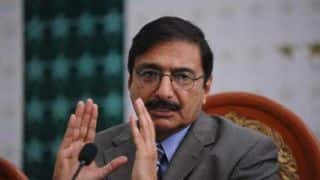