Sarfraz Ahmed is out of action as he had to return home to take care of his ailing mother.

Pakistan‘s top performer Sarfraz Ahmed has hinted that he didn’t speak about his problems during Waqar Younis’s tenure as coach because he was insecure about being dropped from the team. When asked about an incident where he had gone to the chief selector and requested to not to rest him for Zimbabwe tour, Sarfraz admitted this was true. Reminded that he was the top wicketkeeper-batsman of the team who had been performing consistently well than why was he insecure, Sarfraz remained elusive in his reply. The swashbuckling wicketkeeper-batsman is out of the One-Day International (ODI) series versus Australia due to personal reasons.

“I was a bit insecure because I had been dropped from the last T20I matches before the Zimbabwe tour after performing and I was concerned if my replacement performed what would happen,” quoted the 29-year-old. But when asked about the events of the ICC Cricket World Cup 2015 in New Zealand and Australia, when Waqar didn’t play him in the first four matches despite public pressure, Sarfraz tried to play the issue down. “I feel scared to say too much. It could lead to me being dropped. I fear being dropped from the team because I have seen what happened to some other players”, stated the T20I captain of his national side. Misbah-ul-Haq to retire after West Indies tour?

Pakistan are currently touring Australia where they were whitewashed in the three-Test series and have already conceded the five-match series, in 50-over format, with one match to go. They will like to bounce back in the shortest format where they hosts do not enjoy much success. 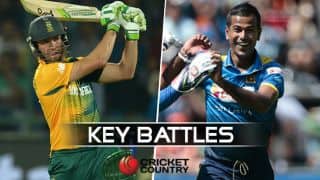