Sarfraz Ahmed has been one of the Pakistan's standout performers in both Test and one-day cricket during their tour of England.

London: Sarfraz Ahmed hopes to put the lessons he has learnt from playing under the “inspirational” Misbah-ul-Haq to good use when he leads Pakistan in their Twenty20 international against England at Old Trafford on Wednesday. The match will be the wicket-keeper/batsman’s first in charge since he was appointed Twenty20 captain five months ago after Pakistan’s early exit from the World Twenty20 in India – where England reached the final only to lose to the West Indies in a last-over thriller. The 29-year-old Ahmed has been one of the Pakistan’s standout performers in both Test and one-day cricket during their tour of England. FULL CRICKET SCORECARD: Pakistan vs England 2016, One-off T20I Match

He led the way with a fine innings of 90 as Pakistan gained a consolation win in the fifth ODI in Cardiff on Sunday, although England still took the five-match series 4-1. It was a much closer contest during the preceding four-Test campaign, with Pakistan coming from 2-1 behind to finish all square at 2-2. Victory in Manchester on Wednesday would see Pakistan finish their tour with a flourish, even if England have already wrapped up the multi-format Super Series.

“I am really excited about the captaincy,” Ahmed told an Old Trafford news conference on Tuesday. “Representing the country is a big achievement, but I am really excited to lead. I am trying to lead everything and to play positive cricket and win tomorrow.” Under Misbah, who no longer plays white-ball cricket, Pakistan have risen to the top of the world Test rankings. ENG vs PAK, One-off T20I, Preview and Predictions

But it has been a different story in ODIs where, with top-order batsman Azhar Ali as their skipper, Pakistan are a lowly ninth in the standings and in danger of failing to qualify automatically for the 2019 World Cup in England. Ahmed, a mainstay in all three international formats, was heartened by Pakistan’s performance in Cardiff. The Test team is very settled – they have played six years together,” he said.

“After the World Cup, we are trying to develop a new ODI team and the morale is high after Cardiff. It’s a positive thing for us to win from 4-0 down – a great achievement chasing 300 outside of Asia. We are very confident. We are trying to develop a new team with youngsters and play Twenty20 like England and Australia.” In the meantime Ahmed will try to follow in the footsteps of Misbah, widely praised for uniting a Pakistan side who have not played a Test series in their own country since an armed attack on Sri Lanka’s team bus in Lahore in 2009. Joe Root, Sarfraz Ahmed, George Bailey rise in ICC ODI Player Rankings

“I think Misbah is an inspiration for all the team – he inspired me,” he said. “I have developed something from him and will try my best.” Whatever the result of Wednesday’s match, the tour has already seen an enterprising Pakistan side do much to restore a reputation damaged in the eyes of both their own fans and England supporters by the spot-fixing controversy that blighted their last visit in 2010. “We have enjoyed this tour and found people have been welcoming,” said Ahmed. “We hope we win the match and end on a high note.” Match Report: Glenn Maxwell's century proves to be the difference as Australia thump Sri Lanka by 85 runs in 1st T20I 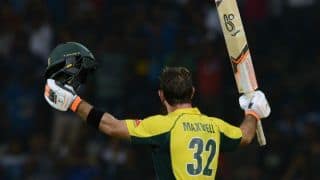