This will be West Indies' first tour of Pakistan since 2006.

Pakistan captain Sarfraz Ahmed thanked the West Indies for touring the country, with the Caribbean side due to arrive in Karachi Saturday in the latest step towards the resumption of top-level cricket in the South Asian nation. West Indies will become only the third international team to play a bilateral series on Pakistani soil since a militant attack on the Sri Lankan team bus in Lahore in March 2009. The tourists are expected to land in Karachi Saturday night local time amid high security.

International cricketers stopped playing in Pakistan after the 2009 assault, citing safety concerns, and the national team has had to play its home matches in the United Arab Emirates since. There has been a trickle of internationals and high-profile matches in recent years, however, with an improvement in the security situation.

Zimbabwe travelled to Lahore for five limited-overs matches in 2015 — the first since the 2009 attack.That was followed by the final of the Pakistan Super League T20 tournament last year — also in Lahore — which featured several international players, including former West Indies captain Darren Sammy.

Soon after, there was a series against a World XI and a match against Sri Lanka — all T20s in Lahore. West Indies will play three T20s in as many days starting Sunday at National Stadium in Karachi — Pakistan’s largest city. This is the Caribbean side’s first tour of the country since 2006.

The venue is hosting international cricket for the first time in nine years. The PSL 2018 final was played at the National Stadium last Sunday, packed with 33,000 fans. “We should thank… the West Indies cricket board and their team for the tour. I hope it will be a successful tour and when they go back they will tell players from other countries to come to Pakistan,” Sarfraz told reporters on Saturday.

Sarfraz was especially pleased with the return of cricket to his home city. “I am also very excited as I last played an international game here in 2008 against India. The credit goes to the whole nation and I hope they will see very good cricket,” he concluded. 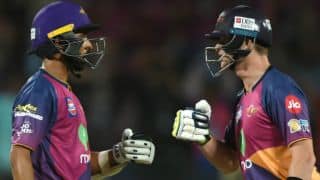 Ajinkya Rahane: I respect Steven Smith as a batsman and player