Ramnaresh Sarwan and Marlon Samuels scored hard-earned half centuries as West Indies struggled to a modest 214 for nine against India in the first One-day International here on Monday. 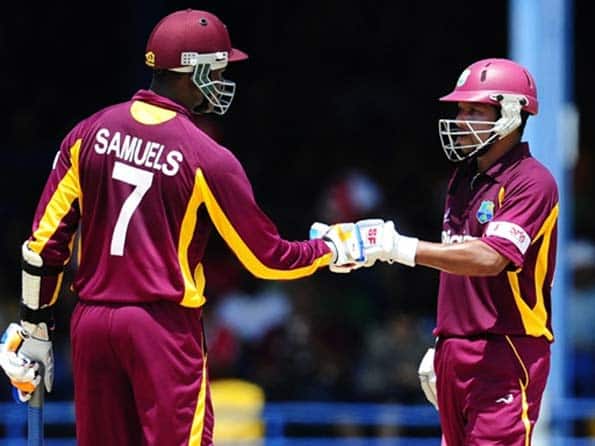 Ramnaresh Sarwan and Marlon Samuels scored hard-earned half centuries as West Indies struggled to a modest 214 for nine against India in the first One-day International here on Monday.

Opting to bat, West Indies witnessed a wobbly start to their innings as they lost their first three wickets scoring just 59 runs in 18.2 overs.

But Sarwan and Samuels then paired up to resurrect the innings with an 82-run fourth-wicket partnership that came off 118 balls.

While Sarwan’s 56 came off 94 balls and was studded with only five boundaries, Samuels took 75 deliveries to score his 55. He hit three fours and two sixes.

However, just when it was time to accelerate both Sarwan and Samuels gave away their wickets but not before registering half centuries to their names.

The stand between Sarwan and Samuels was the only silver lining in the West Indies innings as the hosts scored 73 runs in the last 12 overs losing as many as six wickets.

Down the order, Dwayne Bravo tried his bit to up the scoring rate with a 20-ball 22 while opener Kirk Edwards (21 off 45) was the next best scorer for the Caribbean side.

For India, off-spinner Harbhajan Singh relished at the low and slow Queen’s Park Oval pitch with figures of three wickets for 32, while Praveen Kumar (2 for 37), Munaf Patel (2 for 47) and captain Suresh Raina (2 for 23) shared six wickets among them.

The West Indian batsmen failed to rotate strike for most part of their innings and could score only 70 runs from the 20 overs of frontline Indian spinners — Harbhajan Singh and Amit Mishra.

Even the part-time bowlers, Yusuf Pathan, Raina and Virat Kohli conceded only 54 runs from the fifth bowler’s quota to strangulate the West Indian innings.

Despite some early play-and-miss and a dropped chance in the slips, the hosts found themselves tottering at 28 for two by the eighth over after electing to bat.

Opener Lendl Simmons was on nought when he was reprieved by Rohit Sharma off Munaf in the first slip, but despite the life he scored only six runs before an over-hit was caught by Harbhajan off Praveen at mid-off.

Young prodigy Darren Bravo departed in the very next over when he drove at a moving delivery without much foot movement and this time the thick edge was well-accepted by Rohit in the lone slip.

West Indies then began the long haul of recovery as painfully slow Kirk Edwards (21) and Sarwan dropped anchor for the next 11-odd overs.

But Edwards departed next as he pulled too early at a slow delivery from Harbhajan and a leading edge went high up in the air for Virat Kohli to accept in the slips.

It made the score 59 for three in the 19th over but there was no break in the tempo as Sarwan and Samuels buckled themselves up for the long, hard and boring grind.

The crowd was thrilled when Samuels made the most of a free-hit against Kohli and hoisted him over widish long on for six and then Sarwan steered and flicked Munaf for two consecutive fours to move past his half century.

However, the stands fell silent when Sarwan edged an innocuous Munaf delivery down the leg side to Parthiv Patel behind the stumps.

Samuels too reached his half century in stirring fashion with a powerfully hit six down the ground off Amit Mishra but after doing all the hard work he suffered a soft dismissal when a Raina delivery dislodged his stumps after hitting the inside of his pads.

Samuels departed in the 42nd over with the West Indies scoreboard reading 177 for five.

Harbhajan finished his final spell with two critical wickets of Dwayne Bravo, who was stumped by Parthiv and Carton Baugh (16) lbw while attempting a sweep.

Raina then showed up West Indies batter’s complete ineptness against spin when he picked up two late wickets to leave the hosts gasping for breath.