In a chase of 136 against Kuwait during an ACC Western Region T20 contest, Faisal blasted a match-winning unbeaten 28-ball 83 while belting seven fours and as many sixes.

In a chase of 136 against Kuwait during an ACC Western Region T20 contest, Faisal blasted a match-winning unbeaten 28-ball 83 while belting seven fours and as many sixes.

India’s Yuvraj Singh holds the record for the fastest fifty in T20Is, taking a mere 12 deliveries during against England in the group stages of the first edition of the ICC World T20 in 2007 – that also saw him hitting six sixes in an over.

Colin Munro of New Zealand took 14 deliveries against Sri Lanka in 2016 for the second fastest such score.

With the win, Saudi Arabia qualified for the final of the tournament against an unbeaten Qatar.

Opener Sajid Cheema led a blazing start to the chase scoring 28 pff just 13 balls before being dismissed by Muhammad Kashif. He had lost his fellow opener Shamsudheen Purat for seven to Fiaz Ahmad.

Kashif then removed Ibrarul Haq for a first-ball duck but Khan found support in Abdul Wahid, who made 17 off 19 balls. Saudi Arabia chased down the target in just 9.1 overs, thus boosting their run-rate significantly, and that helped them qualify for the final. Saudi Arabia, Bahrain and Kuwait finished with four points each, behind Qatar who amassed eight, but Saudi Arabia had the best run-rate among the three, owing to Khan s whirlwind knock.

Khan s effort bettered West Indies Shai Hope s 23-ball 55-run knock against Bangladesh in December 2017 during which the occasional wicketkeeper batsman got to his fifty in just 16 balls. Paul Stirling rounds up the five fastest fifties in T20Is with a 17-ball fifty against Afghanistan in Dubai in 2012

Khan s effort is also the fourth fastest in T20s, but there are three more players who have scored a half-century in 15 balls in T20 cricket. Martin Guptill (in New Zealand Domestic Twenty20 in 2008), Yusuf Pathan (in the IPL in 2014) and Sunil Narine (in The IPL in 2017).

Also, there are seven players who have hit a half-century in 14 balls, one in 13 balls and three in 12 balls including Chris Gayle (in the BBL in 2016) and Hazratullah Zazai (in the APL in 2018). Yuvraj s effort in the inaugural ICC World T20 tops the chart as it came in 2007. 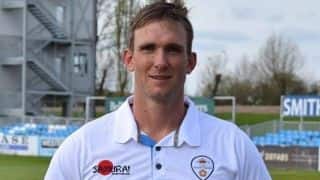