The last time Bengal won the title was way back in 1997-98 with a team comprising Laxmi Ratan Shukla and Shiv Sagar Singh to name a few.

New Delhi: Right-hander Saurabh Singh showed unbelievable temperament as he batted nearly six sessions to score 196 and power Bengal U-19 side to a title triumph over Delhi in the Cooch Behar Trophy final on Sunday. Bengal emerged winner by virtue of a 79-run first- innings lead. In reply to Delhi colts’ first innings score of 314, Bengal scored 393 in their first essay, riding on a 182-run sixth wicket stand between Saurabh and Kanishk Seth (91). The duo showed immense power of concentration on a low and slow Kotla track to out bat the hosts. This was after being reduced to 180 for six.

This is after 19 long years that the Bengal colts, led by Mohammed Irfan Ansari, lifted the National U-19 title. The last time Bengal won the title was way back in 1997-98 with a team comprising Laxmi Ratan Shukla and Shiv Sagar Singh to name a few. Call it a coincidence but Laxmi and Co. also won the Cooch Behar final at the Kotla and the then coach Gautam Shome junior is also a part of the current coaching staff along with Kolkata maidan veteran Pranab Nandy.

Saurabh virtually opened the innings as he was at the crease, facing the third ball of the Bengal innings. He played 527 balls and hit 20 boundaries. Theoretically, out of Bengal’s 177.3 overs in the first innings, Saurabh batted for more than 87 overs holding anchor at one end. That helped former India U-19 player Kanishk, whose 91 came off 212 balls, with the help of some good strokes. In all, he hit 15 boundaries, including a few flowing drives. Saurabh is the ‘seniormost’ among the U-19s as this is his third year at the colts level. No wonder the anxious Bengal kids, sitting in the dugout, were cheering every stroke that their ‘Saurabh Bhai’ played.

A paddle sweep for a boundary followed by a quick double saw Bengal reach the magic figure of 315. Everything else was inconsequential after that. The only glitch was that both Saurabh and Kanishk missed out on well-deserved double hundred and hundred respectively. However, this 196 may not be enough for Saurabh to make it into the India U-19 team as he would be overage by the time the next colts World Cup is held in New Zealand in 2018. Ditto for left-arm pacer Kanishk, who missed the bus in the last edition due to injury and poor form.

However, Saurabh, as a reward for his temperament, could be tried out in the two ‘Youth Test’ matches against England as the one day core will only have the World Cup hopefuls. “I can’t express my feelings. I have won all trophies multiple times as the coach of the East Bengal cricket team. But this is my happiest day as a coach as this is a national title. This is my second season as U-19 coach and the boys were fabulous. Before the last two matches, we were not even sure of qualifying and we got 13 points and just about entered the knock-outs,” a beaming Nandy told PTI.

The other coach Gautam Shome Jr felt that some of the boys are good enough to make it to the senior team in a couple of years. 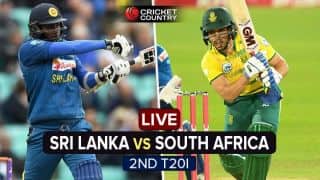