While Maharashtra will play Karnataka in the first semi-final, Saurashtra by virtue of their quarter-final win will meet Andhra in the second semi-final.

Young Arpit Vasavada kept his composure during the end overs as his 43-ball 45 enabled a safe passage for Saurashtra into the Vijay Hazare semi-finals beating Baroda by three wickets at Feroz Shah Kotla, Delhi.

While Maharashtra will play Karnataka in the first semi-final, Saurashtra by virtue of their quarter-final win will meet Andhra in the second semi-final.

Chasing a target of 248, Saurashtra crossed the finishing line in 48.4 overs courtesy Vasavada and useful contributions up the order from opener Avi Barot (82) and skipper Cheteshwar Pujara (40).

The match could have been a lopsided affair after Saurashtra had left Baroda tottering at 105 for 7 in 22.3 overs before Mumbai Indians star Krunal Pandya (61 off 75 balls) and Soaeb Tai (72* off 91 balls) added 97 runs for the eighth wicket to give the team total some semblance of respectability.

The duo batted nearly 21 overs to steady the ship. Left-handed Krunal hit five fours and two sixes in his innings while Tai had eight fours and a six to his credit.

Once Krunal was dismissed, Tai added another 45 runs with Lukman Meriwala (9) for the ninth wicket to take the score closer towards 250.

Chirag Jani’s wicket-to-wicket medium pace proved to be the most effective as he got 4 for 35 while Prerak Mankad had 2 for 29.

While chasing, Saurashtra lost opener Samarth Vyas and Robin Uthappa within 45 runs but Barot and Pujara added 102 runs for the third wicket to set the pace. Pujara hit five fours in his 66 while Barot struck eight boundaries in his 105-ball knock.

However there was a mini collapse when Pujara was brilliantly snapped up by Vishnu Solanki off seamer Atit Sheth’s bowling. Barot, who looked good for a hundred followed suit, as left-arm seamer Rishi Arothe got him holed by Meriwala. Prerak Mankad was also gone leaving Saurashtra in a spot of bother at 181 for 5 with 67 runs to get.

It could have got trickier but Vasavada and Jani (25) added 40 runs for the sixth wicket to put paid to Baroda’s hopes of a comeback.

“I am not exactly happy with the way we chased the total. We were going well and should have finished the match early,” Saurashtra coach Shitansu Kotak told reporters.

The coach also informed that Ravindra Jadeja is recovering from a side strain and is likely to be available for the semi-final match against Andhra. 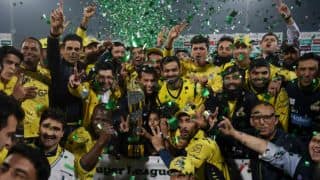 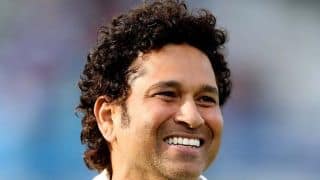