It was 'Spinners' Day Out' once again at Karnail Singh Stadium here as another 18 wickets fell on the second day of the Ranji Trophy Elite Division match between Railways and Saurashtra. 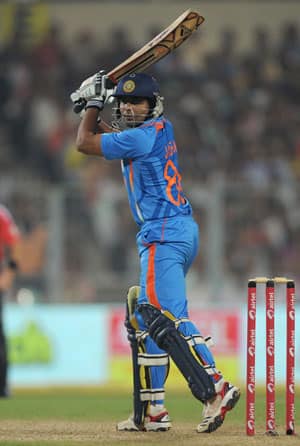 It was ‘Spinners’ Day Out’ once again at Karnail Singh Stadium here as another 18 wickets fell on the second day of the Ranji Trophy Elite Division match between Railways and Saurashtra.

At stumps on second day, Saurashtra looked clear favourites to garner full points as Railways were 97 for six in their second essay while chasing a target of 247.

The target was not a big one but on a pitch where it’s the case of ‘Hit Out or Get Out’, the possibility of Saurashtra bowling four wicket-taking deliveries within first two hours seems more practical than Railways scoring another 150 runs.

After Ravindra Jadeja did the bulk of the damage in Railways’ first innings, it was the turn of Kamlesh Makvana who to got a five-for as he ended the day with figures of 5/30.

Despite having a lead of 94 runs, Saurashtra didn’t fare any better in the second essay as they were all out for 152.

Only Jadeja showed intent of playing shots as he scored 45 in only 62 deliveries with three fours and two sixes. His partnership of 51 for the fourth wicket with Cheteshwar Pujara (32) was also important in the context of the match.

With 34 overs of the second day still left, the Railways batsmen might have let the tricky nature of the pitch play too much in their minds.

It was inexplicable the manner two of their well known grafters Shivakant Shukla (14) and skipper Sanjay Bangar (1) literally gifted their wickets to Makvana by needlessly charging out.

Only M Suresh (27 batting) had shown some stomach for fight but that might not be enough in the end.

Railways coach Abhay Sharma admitted that there was lack of application on the part of some of his batsmen and also defended the curator in the process.

“Some of our batsmen played bad shots. I don’t think curator is responsible in any way. When you have a three day gap between two matches, a curator could have hardly done anything. In northern India, it’s difficult to water the pitch as it might remain wet and also you can’t just use roller on a dry pitch,” Sharma said, defending the track after his counterpart Debu Mitra was critical about it.

It will have to be seen what match referee Pranab Roy — a former national selector — writes in his report about the track.(PTI)