Scotland squeaked home by five wickets in an ODI against Ireland and sent the message that Ireland can't rest on their laurels of being a number one associate nation. 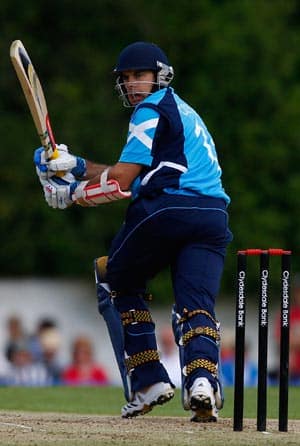 Scotland captain Gordon Drummond saluted the “phenomenal” performance of Richie Berrington after the batsman’s whirlwind 56 saw the team to a shock five-wicket win over Ireland here on Tuesday.

Berrington hit sixes in just 23 balls at the crease before Josh Davey, his middle-order partner, struck the winning boundary top finish on 50 not out as Scotland made 323 for five with nine balls to spare in reply to World Cup giantkillers Ireland’s 320 for eight.

“It’s a remarkable innings, phenomenal. When he went in, it was do or die, we needed that impetus,” Drummond said of Berrington’s batting effort.Berrington and Davey revived a chase that was fading after openers Kyle Coetzer (89) and Fraser Watts (54) had laid a solid foundation.

Drummond said: “That’s the thing – all our batters are in touch at the minute, they have all been scoring heavily in club cricket and regional games.”Apart from big Boyd (Rankin), their bowling is a much of a muchness with ours.

“So we thought we could definitely chase this down with the Ireland beat England at the World Cup in India earlier this year with batsman Kevin O’Brien hitting the fastest-ever hundred in the tournament’s history.But on Tuesday he was brilliantly caught for nought.

However, Ireland captain William Porterfield said it was his side’s fielding that had cost them dear in their second and last match of this triangular series following Monday’s total wash-out against World Cup finalists Sri Lanka.

“We got a score that was defendable, although it wasn’t as strong as we would have liked going into the last 10 overs,” said Porterfield.”Any time you get over 300 it’s a pretty good total, but we didn’t execute it well.

“You have to give credit to the way Scotland played but I thought we were a wee bit sloppy in the field, as we have been before this summer.”We had an intense fielding session on Sunday and I don’t know why it didn’t click today.”Scotland play Sri Lanka at the Grange on Wednesday.”