Both openers, Kyle Coetzer and George Munsey, scored brisk forties before getting out.

Scottish openers, Kyle Coetzer and George Munsey, have done very well to cash in on the powerplay session, against Afghanistan in the 2nd qualifier of the ICC World T20 2016, and extended their run to a few overs past that mark. After the first six overs, they had amassed 60 runs, and kept going at a similar rate. The Afghanistan bowlers seemed surprisingly benign, and were unable to threaten the batsman. Munsey played some fantastic shots and took a particular fondness to the reverse sweep off the slower bowlers. They left Afghanistan clueless very soon in the innings. They have thus laid a fine foundation for the chase of 171, but the job is only half complete as of now. Live Scorecard: Afghanistan vs Scotland, ICC World T20 2016, group B match at Nagpur

Coetzer was finally dismissed for a 27-ball 40 by Shenwari with Scotland’s score over 80 in the ninth over. Afghanistan will hope to make a couple more breakthroughs and pull things back in their favour. Munsey had momentum on his side, and should have looked to consolidate after Coetzer’s wicket, but perished in attempt to play another sweep shot off Rashid Khan as he missed, and was struck in front.

Matt Machan has come in to replace him at the crease. Afghanistan may have been dominated but will now sniff blood. Scotland will hope for this present duo to bat at a similar rate for another 3-4 overs at the very least. Callum MacLeod is the new man in. Rashid is getting a lot of turn and will look to add more wickets against his name. 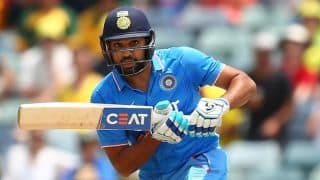