Hakim and Nafisa Jariwala may have discovered the secret by scoring cricket matches in UAE.

Hakim and Nafisa Jariwala may have discovered the secret to a happy marriage by scoring cricket matches in Sharjah and Dubai, home away from home these days for Pakistan‘s international programme.

Hakim has now racked up over 200 matches in Sharjah and Dubai, scoring for the world’s media at the press boxes at the two venues.

The couple, originally from Mumbai, run their own garment and toy business in the UAE, but their shared passion is cricket and when Pakistan played Sri Lanka in a one-day match recently, it marked Hakim’s 225th game as a scorer.

He has since officiated at two more matches, concluding with the ongoing third and final Test between the two Asian nations.

“It is our passion and a common interest and supplementing each other in scoring strengthens our love bond as well.”

Scoring, like umpiring, is an essential part of a cricket match and is as old as the game itself.

The scorers keep an account of the whole match, the runs scored, the balls bowled, wides, no-balls and the dismissals and then preserve the score sheets with the organisers.

As the game evolved with coloured clothing and white balls, scoring has been made easier through computers.

In 1993, the cricinfo.com website was launched and over a period of 20 years has revolutionised every aspect of scoring and statistics.

But despite the march of technology, scoring books are still filled manually, using coloured pens for different entries in batting and bowling.

England’s Bill Frindall led the way for all the scorers, having a significant contribution in a career spanning over 30 years and 377 Test matches.

Wendy Wimbush was a common sight at Lord’s and other England grounds as was India’s Abdul Rehman in Calcutta.

Pakistan had a famous scorer Mohammad Riaz, who was also a bus conductor, while Andrew Samson is one of South Africa’s top scorers while Charlie Watts became famous for his books in Australia.

The late Mohammad Ali Jaffri was the most popular scorer in the Gulf region, completing 200 one-day matches in 2009 and it was Jaffri who inspired Hakim.

“I learned scoring from Jaffri in the early 80s,” said Hakim.

“When one-day cricket was brought to Sharjah in the 1980s I was the deputy to Jaffri in most of the matches.

“This could be two world records — 225 one-dayers (at December 22) and a unique wife and husband combination as scorers.”

Compared to her husband, Nafisa is a newcomer who made her debut in Sharjah in the December 22 one-dayer.

“I have been scoring but made my entry at international level last week,” said the veil-clad Nafisa.

She claims they never fight, not even over her favourite player — Pakistan’s Shahid Afridi.

“I like Afridi as a player and Hakim doesn’t but even that never becomes an issue between us,” she says.

Life has been busy for the couple, but they always take time out for scoring in cricket matches.  “Just like cricket players do, I will carry on as long as I am fit,” said Hakim. 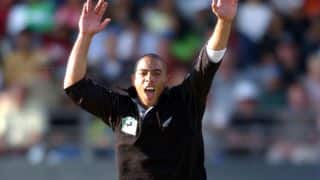 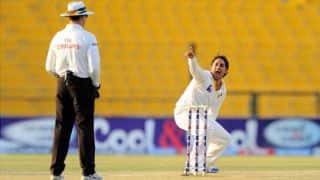