Currently, Sri Lanka are nine for the loss of two wickets in two overs, with Danushka Gunathilaka on zero and Dinesh Chandimal on six.

Sri Lankan opener Seekkuge Prasanna was dismissed fror a mere single by fast-bowler Ashish Nehra after being caught by Yuvraj Singh at mid off, during the chase against India in the second of the three-match Twenty20 International (T20I) series at the Jharkhand State Cricket Association Stadium in Ranchi on Friday. Currently, Sri Lanka are nine for the loss of two wickets in two overs, with Danushka Gunathilaka on zero and Dinesh Chandimal on six. Earlier, Sri Lankan skipper Dinesh Chandimal won the toss and elected to bowl first, as India scored 196 for the loss of six in 20 Overs. He made a change in the form of Tilakaratne Dilshan, who comes in for Niroshan Dickwella, while Indian skipper MS Dhoni moved in with an unchanged squad from the opening T20I loss at Pune. LIVE CRICKET SCORECARD: India vs Sri Lanka, 2nd T20I at Ranchi 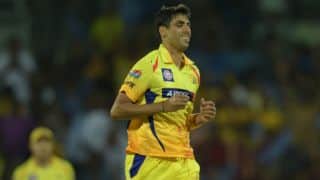