Swashbuckling opener Virender Sehwag smashed a world record 219 to become only the second batsman after Sachin Tendulkar to reach the 200-run landmark in ODIs as India posted their highest one-day total of 418 for five in the fourth match against the West Indies here on Thursday. 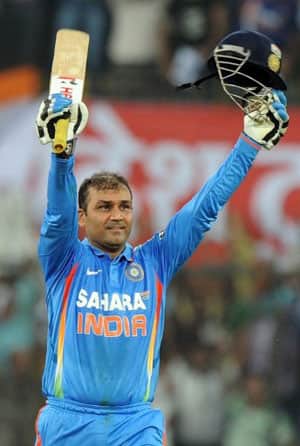 Swashbuckling opener Virender Sehwag smashed a world record 219 to become only the second batsman after Sachin Tendulkar to reach the 200-run landmark in ODIs as India posted their highest one-day total of 418 for five in the fourth match against the West Indies here on Thursday.

Sehwag surpassed Tendulkar’s 200 not out made from 147 balls against South Africa in Gwalior on February 24 last year when he square-cut Andre Russell for a boundary in the 44th over of the Indian innings to go past the 200 mark at the Holkar Stadium.

Sehwag joined his idol Tendulkar in the record books as the only other cricketer to score double hundred in the limited overs game.

The 33-year-old Delhi marauder, who is leading the team in the absence of regular skipper Mahendra Singh Dhoni, today also became the highest individual scorer in the 40-year-old history of One-day International.

Sehwag, who cracked his second three-figure knock against the Caribbean islanders and 15th overall in 240th matches, slammed 25 fours and seven sixes during his 147-ball blitz.

He also reached his double hundred in fewer balls (in 140 balls with the help of 23 fours and six sixes) than Tendulkar, who took 147 for his 200 not out.

Punching the air in glee after reaching his double hundred, Sehwag continued to plunder runs against a hapless Windies attack on a perfect batting strip, having opted to bat, as India raised their highest-ever total against the West Indies in ODIs, overtaking their previous best of 341 for three in Vadodara in January 2007.

Sehwag, who was caught in the deep straight field in the 47th over while attempting another huge heave off Kieron Pollard, also added century stands with fellow-opener Gautam Gambhir and Suresh Raina, who both got individual half-centuries and were both run out.

The opening stand of 176 he put on with Gambhir, who cracked 67 in the same number of balls with the help of 11 fours, laid the platform for the record total.

And his subsequent 140-run stand for the second wicket with another left-handed batsman Raina, who made 55 in 44 balls, took the score past 300-run mark.

Sehwag got life twice during his masterly knock — once on 20 when he escaped a run out chance after being stranded mid-pitch and then on 170 when rival captain Darren Sammy dropped an easy catch at extra cover.

When India commenced their innings today, the decision of the Indian team management to tweak the top order paid rich dividends as Sehwag and Gambhir, who replaced Parthiv Patel after the latter had opened in the first three games, ripped apart the Windies bowling attack.

The Delhi openers tore apart the rival attack in stunning fashion with Sehwag, who went into the game with scores of 20, 26 and 0, dominating the proceedings.

Sehwag clipped the first ball off his pads for a four from Ravi Rampaul, who had dismissed the two openers for first ball ducks in the last game at Ahmedabad on December 5, and then upper cut Kemar Roach over fine third man for a six in the next over to set the tone for a run-spree.

Runs came in a cascade from the two batsmen’s blades as the first ten overs yielded 63 runs, while in the next ten the total jumped to 149.

Sehwag, who said after the Ahmedabad tie that the top order needs to fire, led from the front by greeting the first ball he received from Sunil Narine and Darren Sammy for big sixes.

Gambhir, who has had a poorer run than Sehwag in the series prior to today, square cut Kemar Roach and steered the fast bowler for two fours in the fifth over to show he too meant business.

Both the openers were let off early. Sehwag, on 20, should have been run out after a mix up with Gambhir when he was stranded in the mid-pitch, but Sammy’s throw from point was wide of the mark and bowler Rampaul was not in position.

Gambhir was let off by Andre Russell, also on 20, with the team total reading 41. And the duo took full advantage of that to smash the ball all around the park.

The India’s hundred came in the 15th over with Sehwag going hammer and tongs. He complied his career’s 15th ODI ton with a four in 69 balls, laced with five sixes and ten fours.

Gambhir departed in the next over after his opening partner had reached his ton, run out after a mix up at the non-striker’s end by a direct hit from Pollard from extra cover.

Suresh Raina, another batsman totally off colour in the series, joined hands and prospered in the company of Sehwag.

Sehwag crossed the 150-mark for the second time in ODIs in 112 balls, studded with 16 fours and five sixes.

The right-handed powerhouse then swung Russell over mid-wicket for his sixth six as India surged closer to 300.

After surviving a drop catch on 170, Sehwag went past his career-high score of 175.

Raina then reached his fifty before he was run out. His 55 came in 44 balls, studded with six hits to the fence.

When he was finally dismissed for 219 and was walking back to the pavillion, non-striker Rohit Sharma hugged him before all the West Indies players one after another came to congratulate him on his way back.

Sehwag raised his hands towards the spectators and then turned again to acknowledge the cheers of the capacity crowd of 30,000 as he finally left the ground after a record innings.

Roach gave away 88 for a wicket while Rampaul, who had grabbed a four-wicket haul to bag man-of-the-match award at Ahmedabad, conceded 66 runs for a wicket here.

Russell and Narine, who made an impressive debut in the third ODI, also conceded 63 (from 7 overs) and 46 runs (from 6 overs), respectively.

Earlier, both sides made a change each to their playing eleven.

India surprisingly did not include Irfan Pathan, brought into the national squad after a gap of two and a half years, and replaced pacer Umesh Yadav with leg spinner Rahul Sharma to give the latter the chance to make his international debut.