Delhi bowlers produced a disciplined effort after opening batsman Virender Sehwag top-scored with 35 as they beat Services by 37 runs in the Syed Mushtaq Ali T20 tournament on Tuesday. 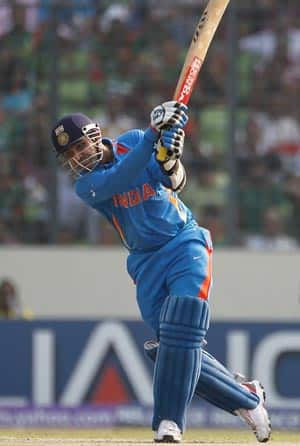 Delhi bowlers produced a disciplined effort after opening batsman Virender Sehwag top-scored with 35 as they beat Services by 37 runs in the Syed Mushtaq Ali T20 tournament on Tuesday.

Put into bat, Delhi scored 115 for six in their allotted 20 overs with Sehwag hitting a 39-ball 35, studded with two fours and three sixes at the Delhi Public School ground.

Sehwag had scored a brisk 29-ball 30 in Delhi’s four-wicket win over Haryana on Monday.

Puneet Mehra (3/14) and Pawan Negi (2/9) shone with the ball with crucial wickets as Delhi shot out Services for 78 in 18.2 overs. India discard Ashish Nehra took one wicket for 10 runs while Ishant Sharma also bagged a wicket.

Openers Sehwag and Farman Ahmed (16), followed by one down Puneet Mehra (19) gave their team a decent start but soon Delhi lost the momentum and kept losing wickets at regular intervals.

Services bowlers came up with disciplined show as Abhishek Sakuja finished with impressive two for 16, which included the wickets of both Sehwag and Ahmed. Amrinder Singh, Suraj Yadav and Avishek Sinha chipped in with a wicket each.

Chasing 116 for victory, Services were never in the run chase as Delhi bowlers stiffled their batsmen bowling a tight line and length.

Though Sumit Singh (21), Anshul Gupta (12) and later Avishek Sinha (19) showed some application but their efforts went in vain.

In the day’s other North Zone matches, Haryana got the better of Himachal Pradesh by two wickets, while Punjab outplayed Jammu and Kashmir by five wickets.

After bundling out HP for a meagre 96, Haryana lost eight wickets before reaching the target with four balls to spare.

In another low-scoring game, Punjab reached the target of 112 in exactly 20 overs by losing five wickets against J&K. (PTI)