Pakistan's hopes of hosting its first international cricket match in three years was today thrown into jeopardy after the High Court in Bangladesh suspended the national team's tour to the strife-torn nation for four weeks due to security reasons. 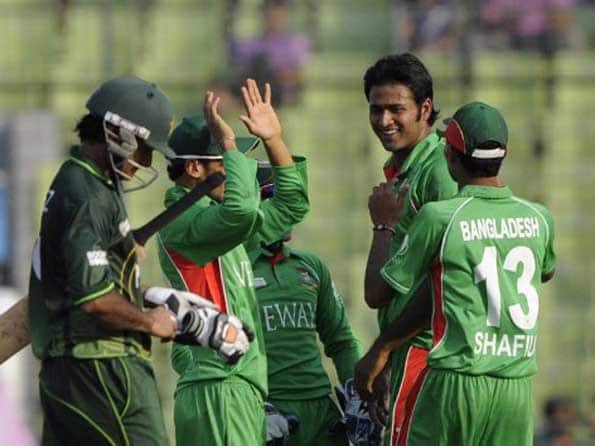 Pakistan’s hopes of hosting its first international cricket match in three years was today thrown into jeopardy after the High Court in Bangladesh suspended the national team’s tour to the strife-torn nation for four weeks due to security reasons.

Bangladesh Cricket Board (BCB) has now informed their Pakistani counterpart that they would not be able undertake the brief tour on the scheduled dates of April 29 and 30 in view of the court order.

Bangladesh team was set to play a one-dayer on April 29 and a Twenty20 international the next day at Gaddafi Stadium in Lahore in the first full international matches in Pakistan since March 2009, when Sri Lankan cricketers and officials were attacked by gunmen in Lahore.

“Suspend the tour for four weeks,” said an order issued today by a two-member bench responding to a petition challenging BCB’s decision to send the national team to Pakistan, where it was set to take part in two matches.

The High Court bench comprising judges Farid Ahmed and Sheikh Hassan Arif questioned the legality of decision to send Bangladesh cricketers on a short trip despite the security risks and ordered the Sports Ministry Secretary and chiefs of National Sports Council chief and BCB to justify the decision in the meantime.

A Supreme Court lawyer and a private university professor challenged the decision citing security concerns as Pakistan Cricket Board was yet to provide a “security plan” for the Bangladesh team’s tour as demanded by International Cricket Council (ICC).

“Pakistan is not safe for any foreign teams now. Their own media including their English daily Dawn says so. For that reason, no country agrees to play there. Under the same circumstances, we should not go there also,” the petition read.

The sudden court development took the PCB by surprise and has now cast a shadow on whether the tour would take place at all.

The PCB reacted with disappointment and concern after the High Court injunction order against Bangladesh team touring Pakistan later this month for a short series.

“It is astonishing to note that a matter lacking any legal issue has been dragged in the court by petitioners who appear to have vested interest and want to jeopardize the Pakistan-Bangladesh cricketing relations,” the PCB said in a statement.

“The matter before the court, prima facie, does not contain any legal issue and it is extremely disturbing to note for Pakistan Cricket Board and Pakistan cricket fans and the world cricketing nations that such an adverse order has been passed to block a bilateral cricket series. PCB has been extremely disappointed due to the creation of this new situation,” the statement added.

The PCB had managed to get a confirmation from Bangladesh Cricket President Mustafa Kamal on Sunday leading to the announcement that Bangladesh would play a ODI and a Twenty20 International match in Lahore on April 29 and 30 respectively.

Bangladesh would have been the first Test-playing nation to visit Pakistan since March 2009 when militants attacked the Sri Lankan team in Lahore killing six Pakistani policemen and a van driver and wounding five of the visiting players.

The news of suspension of the tour by Bangladesh came just as the national selection committee was meeting in Lahore to announce the Pakistan team for the two matches.

TV channels quoted PCB Chairman Zaka Ashraf as saying that he was extremely disappointed with the news from Bangladesh.

“We are surprised that a purely cricketing matter has been dragged into the courts,” Ashraf was quoted as saying.

“We will give a detailed reaction later on. But it is a big setback for Pakistan cricket and fans who were ready to welcome the Bangladesh team,” Ashraf said.

PCB chief operating officer Subhan Ahmad confirmed that they had been officially informed by the chief executive of the BCB that their team would not tour Pakistan due to the court order.

“We are very disappointed and surprised by this development because we had begun all preparations to host the Bangladesh team including providing them Presidential level security,” Ahmad said.

“We don’t know the exact position but things should be clear soon. But it would not be possible to host this series after the four weeks period given by the court due to other commitments,” he said.

Additional Attorney General of Bangladesh, M K Rahman told the media in Dhaka that the High Court had ordered Bangladesh’s cricket authorities to explain why the tour was scheduled to go ahead despite concerns over the team’s safety.

“The court has asked the Board to explain in next four weeks and during this period the team can’t go to Pakistan,” he said.

On Tuesday night, the Punjab government had submitted a comprehensive security plan to the PCB regarding the Bangladesh team’s tour and that was to be sent to the ICC for approval.

According to the security plan prepared by DIG Operations Punjab police, Sohail Khan around 2000 policemen were to be deputed for the protection of the Bangladesh team at the airport, hotel and ground with 80 officers on horseback to man the roads and snipers on the buildings of the route between the hotel and ground. (PTI)

IPL 2012: Plan will be to get Chris Gayle out early, says David Hussey