The 16-year-old finished the tournament as the fifth-highest run-getter, scoring 163 runs in five innings at an astounding strike-rate of 158.25.

India’s batting prodigy Shafali Verma claimed a slice of history on Sunday when she became the youngest cricketer (male or female) to play in the final ICC Cricket World Cup. Shafali, who is 16 years and 40 days old, took the field for India in front of a packed crowd at the iconic Melbourne Cricket Ground in their 2020 Women’s T20 World Cup final against Australia.

With her fearless approach and guts shotmaking, Shafali had set the World Cup on fire with her wielding willow. She finished the tournament as the fifth-highest run-getter, scoring 163 runs in five innings at an astounding strike-rate of 158.25. Her average also didn’t read too badly at 32.60.

The Rohtak-born batswoman smashed 18 boundaries and nine sixes in the tournament.

However, Shafali’s fairytale ended in tears after India suffered an 85-run thrashing against Australia in the Women’s T20 World Cup final in Melbourne.

Chasing a stiff total of 185 in the final, Shafali was dismissed cheaply at the score of 2 and failed to provide India blistering start. The whole India’s batting unit bundled out for 99.

Shafali lost her wicket to pacer Megan Schutt, who removed the batswomen on the third ball of India innings. Schutt ended up with 4 wickets in 3.1 overs and gave away only 18 runs. Schutt and Jess Jonassen (3/20) ran through the Indian batting lineup and bowled out the visitors inside the 20 overs.

Amidst the heartbreaking scenes in the Indian camp, Shafali had to be consoled by skipper Harmanpreet Kaur and teammate Harleen Deol on the pitch even as they saw the Aussies celebrate their fifth title triumph. 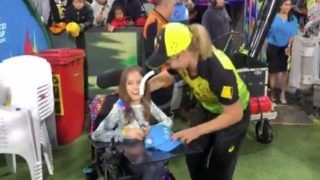