Shafiqullah Shafiq was caught and bowled off the bowling of Krishna Karate as Afghanistan lost their 7th wicket.

Shafiqullah Shafiq was dismissed on a score of 39 off 42 deliveries, as Afghanistan lost their seventh wicket for a score of 219 runs off the first ball of the 42nd over in the third game of the four-match ODI series against United Arab Emirates (UAE) at the ICC Global Cricket Academy in Dubai on Tuesday. Shafiq was caught and bowled off the bowling of Krishna Karate.

UAE earlier finished on a total of 273 for the loss of five wickets from their quota of 50 overs. Skipper Khurram Khan once again shone with the bat, remaining unbeaten on 85 from 80 balls. Mohammad Shahzad was the other star of the UAE innings, with a knock of 62 from 59 balls. Dawlat Zadran was the pick among the Afghan bowlers with figures of two for 51. UAE are currently leading the four-match series 2-0, and a win in the third encounter would help them clinch the series. 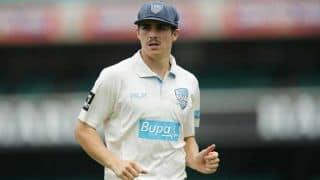