Shahid Afridi’s Pakistan did not have a great time in the Twenty20 International (T20I) series against England in UAE. They were whitewashed 0-3 after winning the Test series 2-0 and losing the One-Day International (ODI) series 1-3. Afridi smashed his way to a 20-ball 29. He could not win the match for his side, but made sure Pakistan made it to the Super Over. As is often the norm, Afridi did not hit a single four in his innings but slammed three sixes: a biff over long-on off Adil Rashid, off the fifth ball he faced; a huge slog-sweep off Moeen Ali off the ninth ball he faced; and to top it all, off the 13th ball, one that soared over the mid-wicket stands, hopefully somewhere inside the borders of UAE. The second six put Afridi at par with Brendon McCullum’s 28 sixes as T20I captain; the third six put him past McCullum. Afridi now leads the way with 29. CRICKET SCORECARD: Pakistan vs England 2015, 3rd T20I at Sharjah

Coming into the series Afridi had 23 sixes to his name; he scored a duck in the first T20I at Dubai, but hit three sixes apiece in the second match (also at Dubai) and the third at Sharjah. In the process he soared past MS Dhoni (25) and Chris Gayle (23). The other Pakistan captains with 10 or more T20I sixes are Mohammad Hafeez (20) and Shoaib Malik (13). The record for anyone from a non-Test playing nation is with William Porterfield (14), followed by Asghar Stanikzai (11) and Preston Mommsen (9). 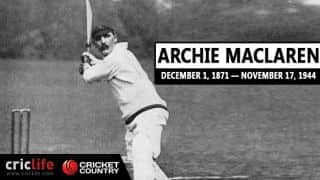